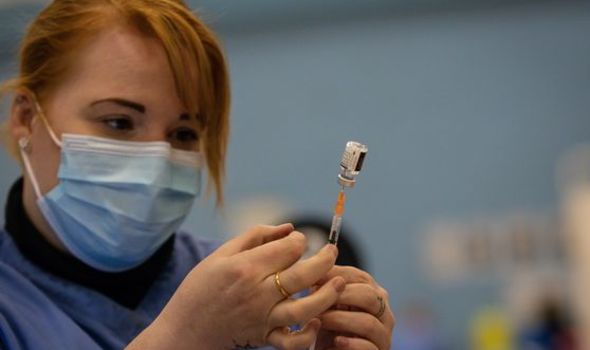 According to latest Government figures, there have been 45,140 new cases of the virus and 57-related deaths over the last 24 hours. The total number of people who had within 28 days of testing positive for Covid-19 has risen to 138,584.

This marks the fifth consecutive day the number of positive tests across the country has exceeded 40,000.

Separate figures published by the Office for National Statistics show there have been 163,000 deaths registered in the UK where Covid-19 was mentioned on the death certificate.

Those who are fully vaccinated may still catch Covid but the jabs are likely to minimise the impact.

These latest figures come after former Prime Minister Gordon Brown said a failure to send unused Covid vaccines from Europe and the US to developing countries would be an act of “criminal” neglect.

Mr Brown told Sky News: “Many of them may go to waste – and that would be criminal – which could immediately be airlifted out to those countries where the level of vaccination is so low that not even the nurses and doctors are protected and certainly not the elderly and vulnerable.

“Boris Johnson promised at the G7 that he was going to vaccinate the whole world.

“He made this bold announcement that, by next year, everybody would be vaccinated who was an adult in the developing world as well as the developed world.

“But since then, so little has happened that we now face the possibility of every target being missed.”

Last month, 43,000 people may have wrongly received negative PCR test results when they were infected with the virus.

This was caused by errors in a private lab which has since been suspended by Test and Trace.

The errors related to test results given to people between September 8 and October 12, mainly in the southwest of England.

This week, Professor Chris Whitty issued a terrifying warning after admitting the idea of a virus-free end to 2021 was “an impossible dream”.

Speaking to delegates at the annual conference of the Royal College of GPs in Liverpool, Prof Whitty said: “In terms of where Covid will go over the winter, well I think the winter as a whole, I regret to say, is going to be exceptionally difficult for the NHS.

“That is, irrespective of whether we have a relatively low but non-trivial amount of Covid, or whether we actually have a further surge in the winter.”

He continued: “I think if you asked 100 modellers you’re going to get over 100 answers, exactly as to how this is going to go out.

“I think what we’re confident of is the very top end, what we would have faced potentially had things gone wrong last winter is not going to happen, barring an extraordinary escape mutant variant, but let’s assume we don’t get something which actually can basically evade our defences completely, I think the top end risks are much lower.

“But we could certainly go up, we’re only two to three doubling times away from a really quite serious pressure on the NHS and it’s already serious, but one that actually will be very difficult to deal with.

“So the margin of error is quite small.”

He warned of tough months ahead for the health service as it battles COVID-19, flu, other viruses and the usual winter problems such as trips and falls.

However, he praised GPs – who are currently under fire over face-to-face appointments – for all their “outstanding” hard work and professionalism over the last two years.

The expert said that when other viruses and winter health issues are added into the mix, together with people seeking care that was delayed during the pandemic, the NHS was facing “an extraordinarily tall order”.

He added: “I wish I could claim that the sunlit uplands and it’ll be fantastic by Christmas, but sadly, I’m afraid that is not the case.”