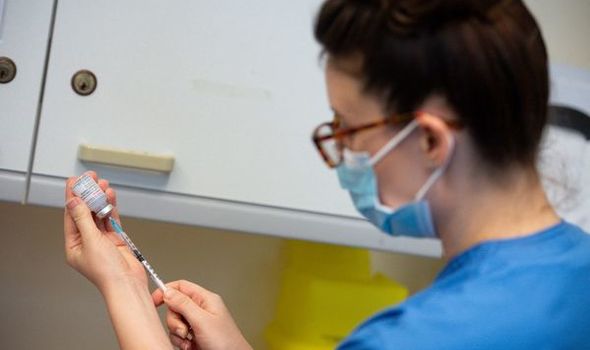 According to latest Government figures, 32,548 new cases of the virus have been recorded across the country. This marks the biggest jump in cases since January 23 when 33,552 were recorded.

The Government also said a further 33 people had died within 28 days of testing positive for Covid-19 as of Wednesday.

This is a drop from the 37 recorded yesterday – which was the highest daily figure for deaths within 28 days of testing positive since April 23, when 40 were reported.

Over recent days, the UK has seen a worrying rise of new coronavirus cases despite the country’s successful vaccine rollout.

Yesterday, more than 28,000 new cases were recorded and a further 37 people died after testing positive for Covid-19.

As of July 6, more than 45,000,000 people in the country have received their first dose of the coronavirus vaccine.

This week, Prime Minister Boris Johnson outlined what the July 19 ‘Freedom Day’ will look like in England, with a final decision to be made next week, despite the rising number of cases.

Freedom Day on July 19 in England will sweep away compulsory face masks on public transport and in shops.

The limits on indoor and outdoor gatherings and rules on social distancing in pubs and restaurants will also be scrapped.

Addressing the nation on Monday, Mr Johnson said: “We will move away from legal restrictions and allow people to make their own informed decisions about how to manage the virus.

“We must be honest with ourselves that if we can’t reopen our society in the next few weeks, when we will be helped by the arrival of summer and by the school holidays, then we must ask ourselves when will we be able to return to normal?”

He added: “To those who say we should delay again – the alternative is to open up in the winter when the virus will have an advantage or not at all this year.”

However, while addressing the nation, Mr Johnson expressed concerns there could be around 50,000 new cases each day by July 19.

He said: “I want to set out what our lives would be like from the 19th of this month – which is only a few days away – if and when we move to step 4 – a decision we will finally take on the 12th – and I want to stress from the outset that this pandemic is far from over and it will certainly not be over by 19th.

“As we predicted in the roadmap we’re seeing cases rise fairly rapidly – and there could be 50,000 cases detected per day by the 19th and again as we predicted, we’re seeing rising hospital admissions and we must reconcile ourselves sadly to more deaths from Covid.

“In these circumstances we must take a careful and a balanced decision.

“And there is only one reason why we can contemplate going ahead to step 4 – in circumstances where we’d normally be locking down further – and that’s because of the continuing effectiveness of the vaccine roll-out.

“When we paused step 4 a few weeks ago, we had two reasons. First, we wanted to get more jabs into people’s arms – and we have, with over 45 million adults now having received a first dose and 33 million a second.

“That is a higher proportion of the adult population of any European country except Malta, and our expectation remains that by July 19 every adult will have had the chance to receive a first dose and two thirds will have received their second dose.

“And second, we wanted a bit more time to see the evidence that our vaccines have helped to break the link between disease and death.

“And as the days have gone by it has grown ever clearer that these vaccines are indeed successful with the majority of those admitted to hospital unvaccinated.”