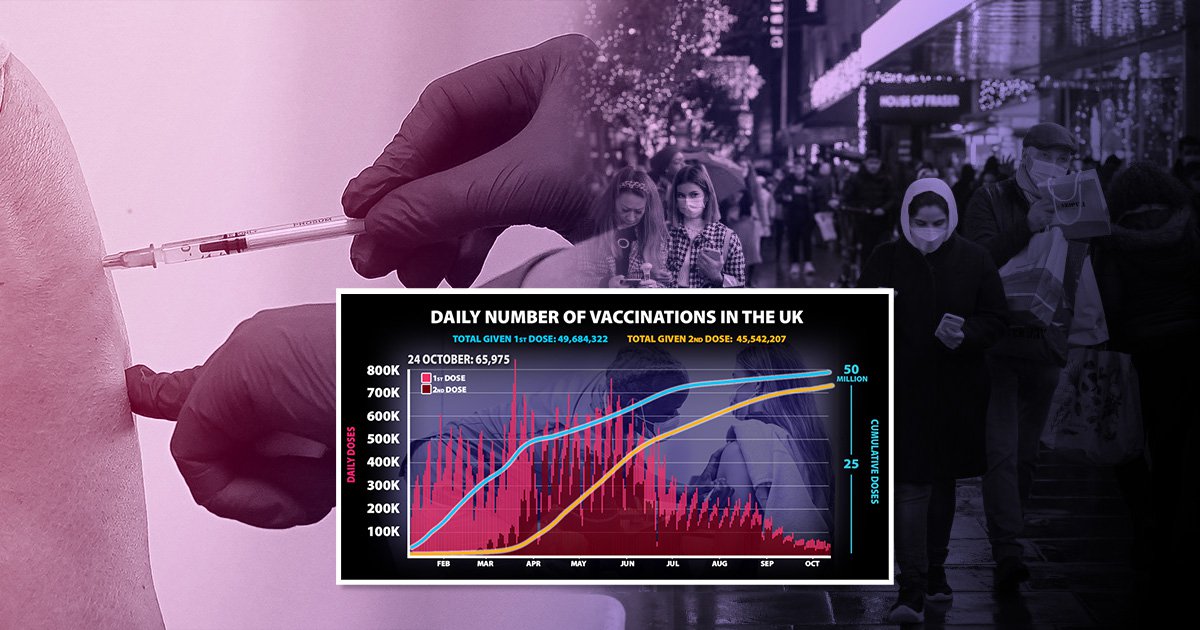 Covid cases will plummet to just 5,000 a day by Christmas without ‘Plan B’ restrictions, according to new modelling seen by the Government.

Ministers came under fire as daily cases topped 50,000 for the first time since lockdown ended and 223 people died in one day last week.

Brits have been urged to come forward for booster jabs to ‘protect the freedom and Christmas that we have all earned’ by the medical director of NHS England.

But a model from the London School of Hygiene and Tropical Medicine suggests infections will peak soon before nosediving over winter, The Telegraph reports.

Other experts say cases could fall by 85% before the festive period in other unpublished models, it’s understood.

The dramatic decline in infections ‘will happen without’ the introduction of mandatory face masks, vaccine passports and working from home measures.

Sage member John Edmunds, a professor in the Centre for the Mathematical Modelling of Infectious Diseases, said: ‘When we were doing the work about two weeks ago, the Health Secretary had made it very clear that the government was not planning to introduce Plan B in the near future

‘Our model was projecting that cases would start to decline some time in the autumn.

‘However, the model also suggests that cases may start to climb again in the spring, due to a combination of waning immunity and increased contacts.’

Cases in schools are believed to be driving the current coronavirus wave, but top scientists believe this will wane as children’s immunity builds.

However, the new modelling comes as other experts caution vaccines are not enough to stop Covid.

Professor Adam Finn, who is on the Joint Committee of Vaccination and Immunisation (JCVI), has warned against complacency amid the ‘worsening situation in the NHS’.

He told Sky News: ‘The vaccines principally are very effective at stopping people from getting seriously ill.

‘They’re not so effective unfortunately at stopping infections altogether or stopping the virus from being spread about.

‘They do have an effect on that, but they’re not by themselves going to be enough at the present time to keep the spread of the virus under control.

‘And we do need to see people continuing to make efforts to avoid contact, to avoid transmission, and to do other things as well as get vaccinated if we’re going to stop this rise from going up further.’

He added: ‘Just giving more people vaccines, including people who maybe don’t actually need the vaccines yet, could actually run the risk of making things worse rather than better.

‘If you boost people before they actually need the vaccine, it is in some senses a waste of vaccine, but also it means that you are immunising them earlier and they may make a smaller response to the vaccine and that response may wear off earlier.

‘So I think the idea of just getting more doses indiscriminately into people’s arms is not really necessarily going to solve the problem.’

Health Secretary Sajid Javid is said to have set up a ‘war room’ where he is holding daily meetings on how to tackle the crisis.

Labour has called for Plan B to be imposed immediately, with Shadow chancellor Rachel Reeves claiming the vaccine programme is ‘stalling’.

The Government is likely to introduce mandatory jabs for NHS staff to protect the vulnerable, despite warnings of legal challenges.

Mr Javid said a final decision had not been taken yet ‘but it is something that I’m heading towards’.

He told Times Radio: ‘We’ve been very clear and open about this, working with our friends in the NHS, and the reason for this is if you’re working in the NHS, that fantastic work you’re doing every day, you yourself are more susceptible to this virus because you’re just much more likely to come into contact with it, but also the people that you’re looking after are more vulnerable and that’s why they’re in hospital, they’ve got health needs, and this is about protecting them and protecting yourself.’