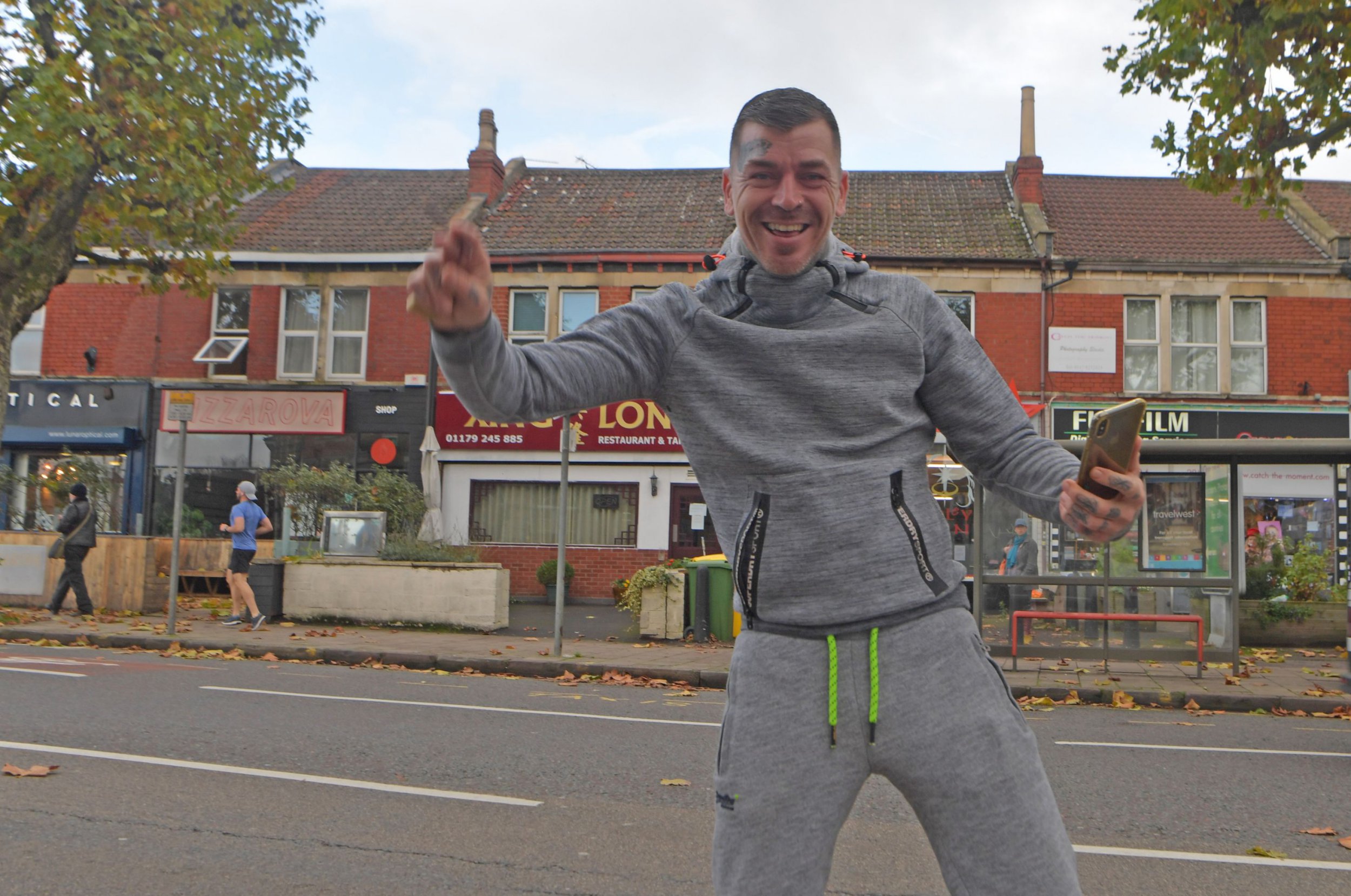 A tattoo artist who said he would ignore the lockdown even after receiving a £1,000 fine, has shut his studio after police paid him a visit.

On Saturday a large team of officers showed up at Holey Skin, Bristol, and found a small group of people gathered outside.

The crowd dispersed as owner Aron Walton locked up the premises and started arguing with police and council enforcers about how it was lawful for him to stay open.

In footage broadcast to his 84,000 social media followers, he repeatedly and falsely refers to a clause of the Magna Carta which was written specifically for 25 barons and not the general population.

Later that day, Mr Walton shared a video in which he said: ‘I’d just like to say a f******g well done to everyone who opened today. Fair f*****g play to you.

‘We need to continue this. From Monday onwards everyone needs to be open again.’

What he didn’t mention was that by this point, he had locked up his shop, in the suburb of Bishopston.

When Bristol Live visited the studio at 11am on Tuesday, the lights were on but there was no one inside.

Footage from Saturday shows one officer warning the small group outside Holey Skin: ‘You need to move on or we will have to start issuing tickets.’

The officer then asks Mr Walton if his business was open, to which he replies: ‘I do not consent, I do not answer any questions and I do not wish to enter any contract or joinder with you.’

The artist says he ‘must caution’ the officer for trying to enforce ‘unlawful acts, statutes of legislative laws’.

He adds: ‘Statutes are not law. Acts of Parliament are only enforceable with your consent.’

The tattooist said any attempt to enforce these would be ‘an act of high treason for which you will stand trial before a duty of the people and which still carries the gallows’, but the death penalty was formally abolished in England in 1998.

Talking on a headset, the officer could be heard saying: ‘He’s engaging in the sense that he’s tried to caution me.’

The video appears to show officers ignoring Mr Walton when he asked them if they were ‘on their oath of office’.

One officer again warned those gathered could be issued with a fine, as two people stood close to Mr Walton without wearing a mask.

The video did not show what happened next, but Bristol City Council says its officers and police had attended ‘in response to reports of the business located there opening for trading in breach of lockdown rules’.

A council spokesman said: ‘Police officers attending the scene engaged with the owner at the premises and asked the small group who had gathered outside of the building to disperse.

‘Shortly before council officers arrived the business was locked up by the owner and the small crowd left without incident.’

In September, Mr Walton claimed he flew from Zante to Bristol Airport on an easyJet flight carrying three passengers who later tested positive for Covid-19.

It emerged that he kept going into his tattoo shop in the following days. He said he did not ‘consent’after Test and Trace identified him as a contact of someone who tested positive.

Mr Walton has been a vocal member of Covid-denying conspiracy group Stand Up Bristol, describing Covid-19 as a ‘scamdemic’.

During the weekend before the second national lockdown in November, Mr Walton posted two videos in which he vowed to ‘remain open throughout’, calling for a party on the day the rules came into force.

He added: ‘We are open for business we don’t give a f*** about this lockdown… I encourage every business to do the same.’

A few weeks later he was fined £1,000 for remaining open. Officers visited him several times during the lockdown and were repeatedly met with irrelevant references to medieval law.

The original version of Magna Carta, signed by King John in 1215, granted barons powers to ‘assail’ the monarch and ‘seek redress’, but these powers were not given to the population at large.

Within a year of being written, the clause was removed, and i has never been incorporated in statutory law.

Mr Walton has also presented arguments against lockdown which appear to be rooted in the ‘freeman on the land’ conspiracy theory.

Its proponents say laws only apply to someone with their consent. No such argument has ever succeeded in court.

Common law is created by the judiciary through its decisions in the courts, under the principle of binding precedent.

But it is overruled by the statutory laws written and passed by Parliament – such as Covid legislation – under the constitutional principle that Parliament is Sovereign.