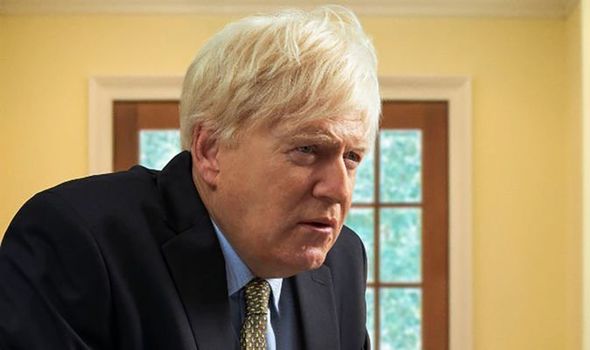 This Sceptred Isle is a five-part series which will air on Sky Atlantic in autumn next year, at the same time an inquiry into the Government’s handling of the pandemic is likely to be sitting. But with a reported “satirical” approach and a rumoured “fantasy sex scene” involving the PM and wife Carrie, critics have warned it must not blur fact and fiction.

According to Sky, “it will recount the first wave of the pandemic, based on testimonies of people from the Government, the Scientific Advisory Group for Emergencies, care homes and hospitals”.

It adds: “It will chart the events surrounding the Prime Minister, the Government and the country in the face of the first wave of the global pandemic.”

The MP for South Holland and The Deepings, Lincs, said: “There are far fewer good dramas on TV and radio now because of the desire to sensationalise and trivialise everything, drama is hurtling downhill. As to whether it’s responsible to publish something on Covid during an inquiry, that’s a more serious matter.

“One would hope a responsible broadcaster would want to behave sensitively towards something which has brought pain and suffering to many. If the inquiry is compromised that’s not in the public interest or common good.”

Former Cabinet minister Ann Widdecombe believes the drama is in “bad taste given what happened”.

Asked about its impact on the inquiry, she said: “I don’t think the drama would make it difficult for the Government, but it does depend on how it depicts Covid.”

“Like The Crown, you get something that is based on fact and which isn’t fact and people think it must be true and there’s nothing you can do about that. If people are that gullible, what do you do?

“I won’t watch it for a start. Other people might think, ‘Oh that will be fun’ and then they will absorb any messages that are being put out about Covid. It’s also not very sensitive to the families [of victims], as well as being tasteless.”

But TV sources have revealed that the drama may be closer to “satire” than “documentary-drama”.

A well-placed insider said: “There’s a very interesting story behind this production. Sky appointed Michael Winterbottom who is a very edgy director but who works very much in the moment. Most people thought that was odd.

“Then I heard there was a fantasised sex sequence between Carrie and Boris.

“I have also been told that it was now actually a satire. I don’t think anyone is ready for a Covid satire. It certainly didn’t sound like a documentary-drama.”

There have also been reports This Sceptred Isle shows a birth scene involving Boris and Carrie but it is not known if this will make the final cut. Among the cast is newcomer Bitu Thomas as Home Secretary Priti Patel.

She paid tribute to the politician’s career, explaining: “It is rare to see women of colour in powerful positions in the highest offices of the UK.

“I got to play a real-life character for a series and I am thankful that people like her exist in Cabinet positions so that actors like me can portray her.”

Sky says the show ‑ already filmed ‑ will carry a disclaimer, unlike episodes of The Crown, which was heavily criticised for its portrayal of the treatment of Princess Diana.

It said: “Every episode will be preceded by an information card highlighting that it is a drama and that some dialogue and scenes have been created for dramatic purposes”.