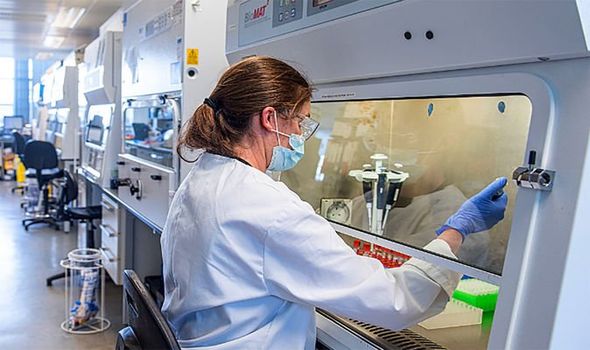 They claim the technology behind the Oxford/AstraZeneca inoculation has the potential to revolutionise treatment of a disease that kills 166,000 people in the UK every year.

Professor Adrian Hill, director of the Jenner Institute at the University of Oxford, said: “This new vaccine platform has the potential to revolutionise cancer treatment.”

The research has only taken place targeting tumours in mice but tests in patients with lung cancer will start later this year.

The research was conducted by scientists at the University of Oxford, where the Oxford/ AstraZeneca jab was developed, and the Ludwig Institute for Cancer Research.

Using technology that made the development of the Covid vaccine possible in less than a year, researchers have designed a two-dose therapeutic cancer shot.

Preliminary results showed it increased the levels of antitumour T-cells infiltrating cancerous growths and improved the effectiveness of immunotherapy, a technique that activates or suppresses the human immune system.

Compared to immunotherapy alone, the combination showed a greater reduction in tumour size and improved the survival of the rodents.

Immunotherapy, which turns a patient’s immune system against a cancerous tumour, has resulted in remarkable improvements in outcomes for some patients.

In this case it works by taking the brakes off anti-tumour T-cells to allow them to kill cancer cells.

However, despite its success, the technology, known as anti-PD-1 therapy, is ineffective in the majority of sufferers.

One reason is that some patients have low levels of T-cells. Oxford’s vaccine technology, used in the creation of the Oxford/ AstraZeneca jab, generates strong T-cell responses.

To create a vaccine treatment that targets cancer cells, researchers designed it to target two proteins present on the surface of many cancer cells.

Benoit Van den Eynde, professor of tumour immunology at the university, said: “The proteins act like red flags on the surface of cancer cells to attract immune cells that destroy tumours.

“This broadens the potential benefit of this approach to people with many different types of cancer.” The forthcoming trial follows one for a similar cancer vaccine in prostate cancer undertaken by the University of Oxford that is showing promising results.Tim Elliott, professor of immunooncology at the university, said: “We are combining our scientific expertise in immunology and antigen discovery with research on vaccine platforms.

“By bringing these teams together we can continue to address the significant challenge of broadening the positive impact of immunotherapy to benefit more patients.”

The race for a cure comes as Covid has plunged Britain into a cancer crisis.

There could be as many as 45,000 missing cancer patients because of the screening pause and others not coming forward, it has been claimed.