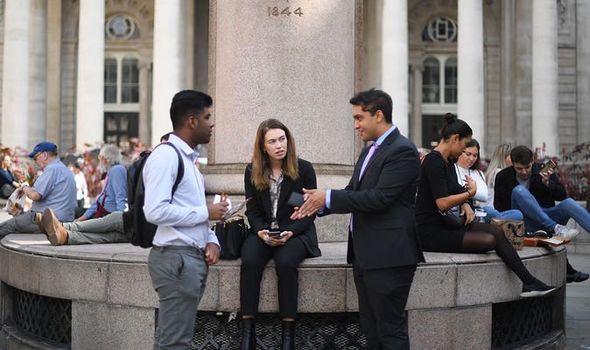 Businesses have been told they are expected to facilitate a gradual return, and many private companies think the end of the school holidays and the fact most adults have been double jabbed is sufficient reason to demand a return to the office.

Although some of Britain’s biggest employers told staff to return to work, albeit for fewer days per week, Whitehall remained largely deserted.

The Government dropped its work-from-home diktat in the summer and has given advice to businesses about transitioning to Covid-secure offices.

“By taking appropriate steps to reduce the risk of transmission of Covid, we are gradually increasing the numbers of staff in the workplace, while ensuring we retain the flexibility of home-based working where appropriate.”

NatWest, which employs 34,000 office-based staff, said a very small number were currently coming in and that it was pushing for a gradual return from September 13.

The prospect of returning to the old way of working has inevitably led to a rise in anxiety, with therapist Holly Thurnstone saying: “After a year-and-a-half of lockdowns, working from home and self-isolation, it is natural for us to take a while in getting back to normal day-to-day living again.

“It’s OK to have worries and anxieties about going back to the office.” It is hoped the mass return will help spark a much-needed economic recovery.

Combined with the start of a new school term for most children, it created the perfect storm of rush-hour chaos not seen since coronavirus hit Britain.

Inevitably, it meant snarl-ups on roads while trains and buses creaked under the weight of demand.

In London, rush-hour traffic returned to pre-pandemic levels as commuters struggled with gridlocked roads like the M25, A2 and A20. Congestion at 9am was put at 61 percent capacity – almost the 63 percent it was in 2019.

The Tube network saw its busiest rush hour morning since March 2020, according to Transport for London. Between 7am and 8am there were 277,000 taps of payment cards at stations – an increase of 24 percent from last Tuesday. Last Monday was a bank holiday. Between 8am and 9am, it was even busier with 332,000 taps – up 22 percent on last week.

Similar scenes were reported across the UK, with roads in major cities including Manchester, Birmingham, Leeds, Liverpool and Sheffield snarled up with commuter traffic.

Although Covid has been a boon to millions, leading to a more flexible way of working, it has been disastrous for the high street.

Almost 50 shops closed each day due to lockdowns and the switch to online shopping. Between January and June alone, Britain lost a total of 8,739 stores, research by financial services giant PwC and the Local Data Company showed.

July’s exit from lockdown gave some hope, but business is still one fifth below pre-Covid levels. Lisa Hooker, of PwC, said: “The next six months will be a make or break for many chains.”

Still, yesterday’s return will be a huge relief to Chancellor Rishi Sunak ahead of his autumn statement, scheduled for November. However, his generous furlough scheme ends on September 30, with many fearing a surge in unemployment.

The package has cost almost £70billion but saved 11.6 million jobs.

Some will WFH, waiting for the heatwave to end

Families make the most of the sun on the beach in Bournemouth yesterday, with many nationwide taking advantage of the working-from-home revolution to top up their tans.

Warm air from the Med is set to push temperatures to 30C (86F) in the South-East today – too late for many children, as millions are back at school.

The week of hotter weather is set to be way above the September average of 64F as the fallout of humid air from deadly Hurricane Ida in the US creates a change from the UK’s grey skies and rain.

Thunderstorms expected in the second half of the week will end the hot spell.