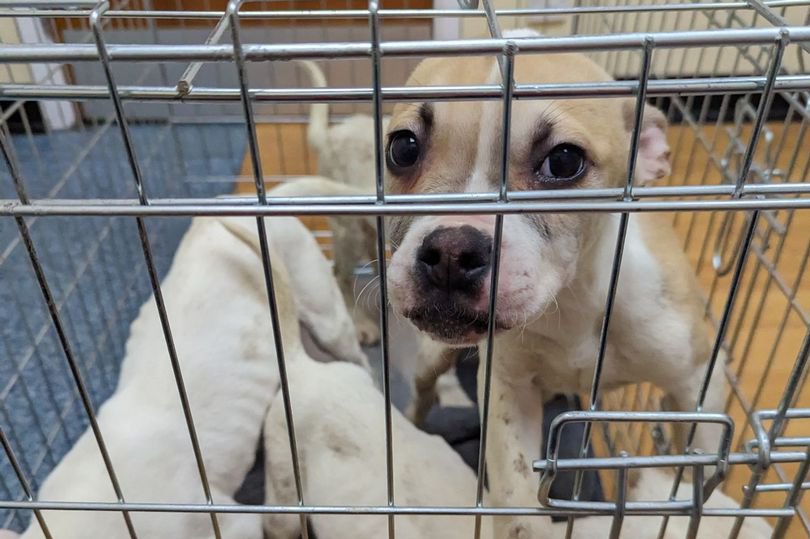 A gang dumped a litter of puppies in a layby after likely failing to sell them over Christmas.

The young American bulldogs were rescued by a couple who happened to be passing by after the animals were left by the side of a road in North Yorkshire.

One of the dogs was too sick to be saved, and later had to be put down.

The couple say they saw a group of men leaving the scene at around 4pm on December 29 in a black SUV, though their faces were obscured by medical masks and they were wearing dark clothing.

RSPCA chief inspector Mark Gent, who is investigating the case along with the North Yorkshire Police, said: ‘We are working with the police to try to find the people who left these poor puppies […] Some of the dogs were underweight and their ribs were clearly visible, while they were all covered in faeces.’

The rescuers took the litter home before contacting the authorities. They then took the animals to the vet for treatment.

Investigators believe the young bulldogs were likely reared by illegal breeders who, unable to sell the animals over the festive period, instead chose to abandon them.

The Christmas holidays have long been a time that sees a rise in rates of animal abuse.

Even so, figures from the RSPCA suggest that the abandonment of household pets has increased 25% on the previous year, with an accompanying 13% increase in incidents of neglect.

Inspector Clive Turner, from North Yorkshire Police’s Rural Task Force, said: ‘The treatment of these puppies is as cruel as it is shocking, and we need to identify those responsible. I’d urge anyone with any information that could assist the investigation to get in touch as soon as possible.’

The RSPCA also encourages anyone with knowledge of the incident on December 29 to contact the organisation on their appeals line at 0300 123 8018.