Cricketer Azeem Rafiq has told MPs he felt “isolated, humiliated at times” due to the bombardment of racism he suffered and the “constant uses of the word p***'” during his time at Yorkshire County Cricket Club.

The 30-year-old whistleblower had said it was “time for truths” as he prepared for the Digital, Culture, Media and Sport (DCMS) select committee hearing in Westminster.

Rafiq, who has been involved in the cricket set-up in Yorkshire since the age of 11, has talked openly and candidly to MPs, telling them: “Pretty early on I joined a dressing room full of my heroes.

“Me and other people from other Asian backgrounds, there were comments such as ‘you lot sit over there’, and there seemed to be an acceptance in the institution. No one really stamped it out.” 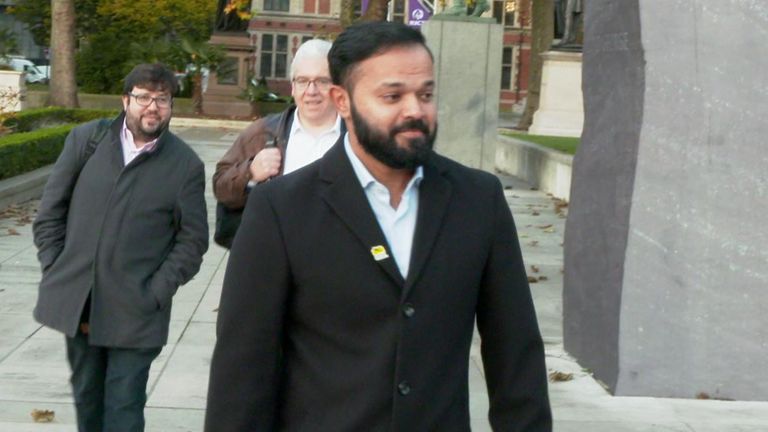 “In my first spell I think I was in denial. I looked the other way. Towards the end of my first spell, I knew there was something wrong, but couldn’t put my finger on it.”

He added that he felt there was a change at the club when returning for his second spell. He says the “temperature changed” in 2016.

“I felt isolated, humiliated at times, constant uses of the word ‘p***’.”

The former all-rounder and ex-England U-19s and Yorkshire captain has the protection of parliamentary privilege while giving evidence to MPs – meaning he is free to name names without worrying about legal reprisals.

Rafiq, who played two spells at Headingley between 2008 and 2018, initially voiced his claims in an interview with Sky News in September 2020, alleging “deep rooted” racism at the club left him close to taking his own life.

Yorkshire County Cricket Club launched a formal investigation and concluded he was the victim of “racial harassment and bullying” but nobody at the club faced disciplinary action.

A leaked report suggested that the use of “the P word” towards Rafiq was made in the context of “friendly banter”.

Rafiq’s emotional and shocking testimony continued as he fought back tears and told the committee about the loss of his baby son, describing the club’s treatment of him at this time as “inhuman”.

“They weren’t really bothered that I was training one day and I got a phone call to say that there was no heartbeat,” he said.

The panel also heard of a time he was “pinned down” by a cricketer and forced to drink red wine at the age of 15 – and how the word “Kevin” was regularly used to “describe people of colour” in a “derogatory way all the time”.

Asked why he returned to YCCC for a second spell, he said he was in a position where putting food on the table was really difficult, “but more importantly I think I was in denial – right up to 2017”.

But it was after the loss of his child he said he realised he couldn’t “look the other way”.

The club’s full report into the Rafiq’s allegations has never been published, and its handling of the case and inaction has prompted widespread criticism.

It has been stripped of its right to host international cricket, there has been a mass exodus of sponsors and growing political pressure from Westminster – with Health Secretary Sajid Javid saying “heads should roll”.

Last week, Rafiq, who was born in Pakistan and moved to England when he was 10, agreed a financial settlement with his old club.