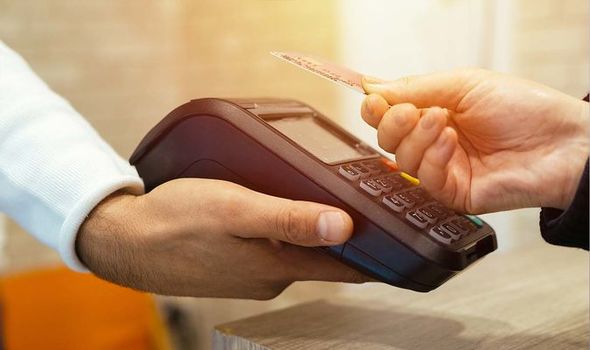 He said: “Thefts can take weeks to resolve with banks. Invariably this will be money that a lot of people won’t have and Christmas is just around the corner – meaning that many consumers will be left high and dry at the worst possible time.”

The single-tap limit is rising from £45 but retailers’ terminals will have to be updated, so the option will not be available everywhere immediately.

He said: “If you lose your wallet with three credit or debit cards, that’s £300 at risk. And while UK Finance has reassured consumers they’re fully protected in the event of fraud, obviously some will still want to manage their own limits, which they can do.”

He continued: “There is a wider, more sinister risk to the population as a whole, and that’s becoming carried away when spending.

“We’ve already begun to see our bank balances deplete a lot quicker – particularly after nights out – with many approaching the contactless swipe as a ‘tap-and-don’t think’ action.

“Contactless is extremely simple to do, with minimal friction. The raise makes it even easier, and people will, undoubtedly, spend more.”

More than eight in 10 in-store payments are made through contactless, a spokesman for Visa said.

Fans of contactless include Prince William. The new limit will accommodate the UK’s weekly grocery shop average of £63.70, and eating out for four, which averages £93.

Visa said: “The new limit will give consumers even more choice.”

This is the fifth time the contactless limit has been raised, after it was initially set at £10 in 2007.

The Treasury and the Financial Conduct Authority (FCA) made the decision to change the limit following a public consultation and discussions with the retail and banking sectors. An FCA spokesman said: “Available fraud rate data suggests there to be no significant increase in contactless payment-related fraud since industry increased the limit to £45 in April 2020.

“What’s more, we have seen no material increase in fraudulent transactions in other countries where the contactless limit increased to the equivalent of £100 or above.”

He said: “Post Offices will always offer cash services, including the ability to withdraw the amount of cash a customer needs to the penny.”

So, how do you feel about it?

Nathalie Oatham, 34, of Reading: “I think the new limit is a bad thing because people are going to miss £100 far more if it happens by mistake. And what about overcharging and fraud?”

Carmen Michele, 25, of Birmingham: “I prefer to use ApplePay on my phone than contactless card and often don’t take my wallet out with me. There’s the security of facial recognition or passcode.”

Paul Randell, 45, of Beaconsfield, Bucks: “I think it’s a bad thing because if someone gets hold of your card they can spend half your wages. It could be life-changing for those on low incomes.”

Taser Mevlit, 49, of south-east London: “I think there are two sides to this because if someone grabs your card they can keep spending £100. People can spend quickly, so they will get carried away with it.”