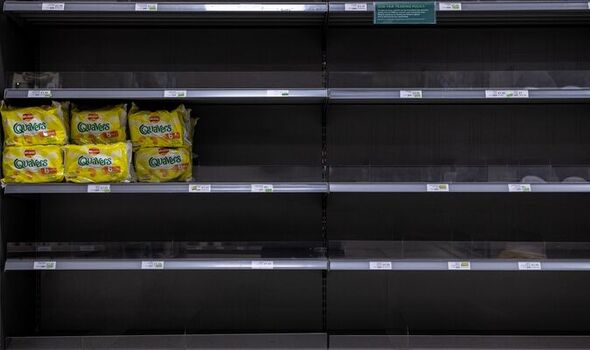 Russia’s invasion of Ukraine has already led to severe shortages of sunflower oil as well as price rises in leading stores, the data revealed. The conflict has hit the food industry hard in general and as the war rages on and problems affecting global exports continue to soar. The Black Sea region, which includes Russia and Ukraine, produces around 80 per cent of the world’s cooking oil – a key ingredient for producing popular snacks. But the supply is plummeting as ports are shut down by bombardments or the threat of shelling and farmers are hampered from planting and harvesting crops.

Trade magazine The Grocer reported yesterday that the war is causing price rises and availability issues for sunflower oil – with industry sources warning that the supply could dry up in weeks.

It says Aldi appears to be the worst hit. The discount store only sells onelitre bottles and the magazine says two London stores were out of stock when visited last week. One source said: “Aldi are obsessed about availability but there simply is not any.”

Makers of products including crisps, chips and cereal bars have been forced to alter recipes and replace sunflower oil with refined rapeseed oil but are struggling to keep up with demand.

One industry source added: “No one is going to have long-term supply this year.”

Andrea Martinez-Inchausti of the British Retail Consortium said: “Where sunflower oil exists as an ingredient, such as crisps, retailers will be substituting it with other safe oils.”

A strike by lorry drivers coupled with bad weather could lead to price rises of up to 30 per cent on fruit and vegetables from Spain.

Many UK supermarkets were already short of fresh produce from the region when Spanish truckers took action against rising diesel prices two weeks ago.

Its effect has been worsened by bad weather in Iberia and North Africa, leading to poor crops.

Nigel Jenney, CEO of the Fresh Produce Consortium, said: “They are not costs which can simply be borne by individual businesses.”

He predicted cost rises of at least 20-30 per cent for suppliers.

Spain supplies tomatoes, peppers and lettuce outside the UK’s own growing season.