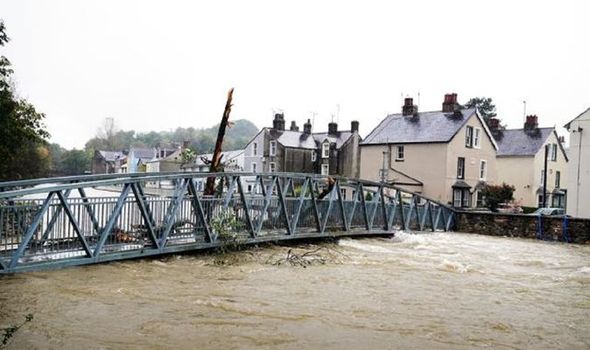 Fast-flowing floodwater cut off the foot bridge in Cockermouth, Cumbria, yesterday and debris became trapped on it. Local Joseph Hill, who captured the images, said: “I was shocked at the speed the river had risen since the night before. “Everything was ok until it suddenly wasn’t. The flood defences were working well but once they failed everything was under water in a matter of minutes.”

The Cockermouth Emergency Response Group said on Facebook that the Cocker and the Derwent rivers were very high, adding:

“Please put any flood defences you have in place as a precaution.

We are already out and about and will keep you updated.”

Further warnings are expected as a fresh deluge of rain will lash down across the country today.

The Met Office issued four yellow alerts, as well as one amber alert in the north of England.

Up to nine inches of rain is going fall in certain parts of the Cumbrian fells, forecasters said.