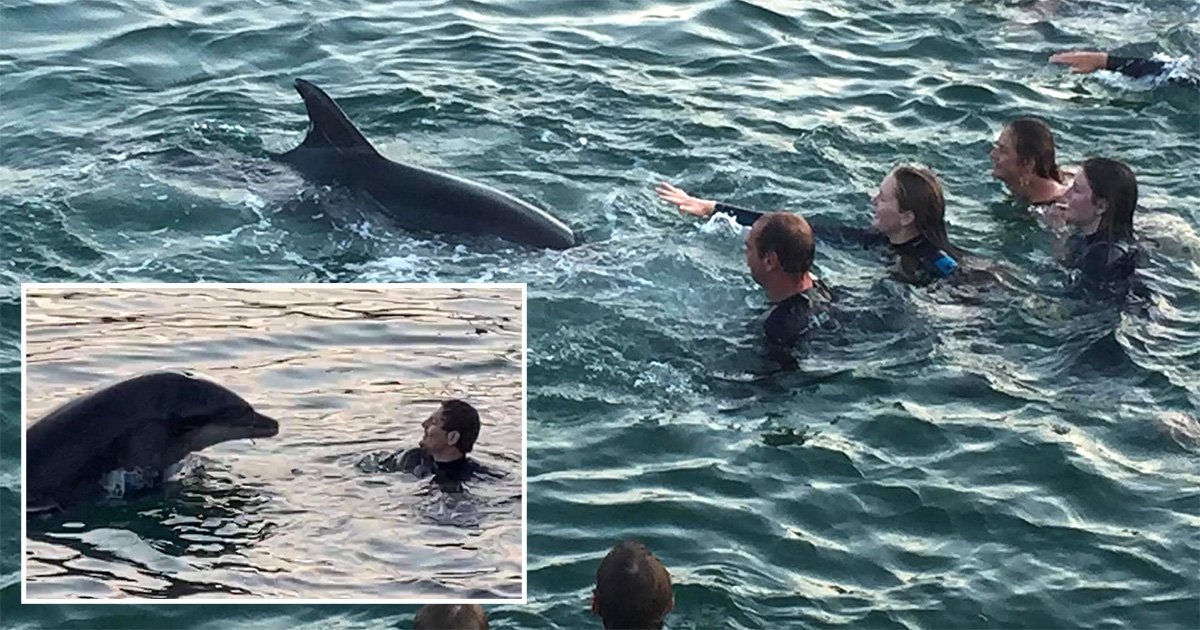 Wildlife experts say a friendly dolphin seen playing with swimmers off the Cornish coast could actually be dangerous.

The animal appeared to be enjoying itself in the water with a large group of youngsters, who screamed in delight as it splashed them with water and did tricks.

The solitary mammal, named Nick, charmed the crowd as it popped in and out of the water – but observers said its behaviour became increasingly boisterous and erratic on Sunday evening.

A group of tourists and paddleboarders could not believe their luck when the sea creature swam over to them and join in the fun at Hayle Harbour.

But local experts are concerned for Nick’s welfare – and say he could inadvertently caused an injury.

The bottlenose dolphin is said to be a ‘social solitary’, meaning he chooses to socialise with people instead of other dolphins.

The animal had previously been spotted in the Isles of Scilly in June last year and later in County Cork, Ireland.

Marine animal rescue charity British Divers Marine Life Rescue (BDMLR) captured footage of him interacting with his new friends and waving his tail at them.

Dolphins are notoriously intelligent and social creatures that spend a lot of time playing together in their pods in the wild and it is unusual to see them alone.

The organisation’s area coordinator Dan Jarvis, who filmed the sweet video, said: ‘We had a call about a dolphin in St Ives Harbour, which turned out to be the new social solitary bottlenose dolphin who has been called “Nick”.

‘It later turned up in Hayle Harbour and came in amongst a large group of people, mostly children, who were already in the water and began interacting with them quite boisterously.;

He continued: ‘After a little while it became obvious that the dolphin’s behaviour was escalating and becoming more erratic, so we were very concerned that someone would get injured.

’Hayle Surf Life Saving Club who were also monitoring the situation with us, also advised people to leave the water for their safety and their boat was then used to lure the animal back out to sea before the outgoing tide trapped it.’

BDMLR and another charity, The Marine Connection, are working together to raise awareness about the dolphin.

They are urging people who encounter the animal to be cautious as its behaviour could be much more unpredictable than other dolphins.

Their advice includes not feeding Nick or going into the water to play with him and to keep boats moving at a steady course and speed when around him.