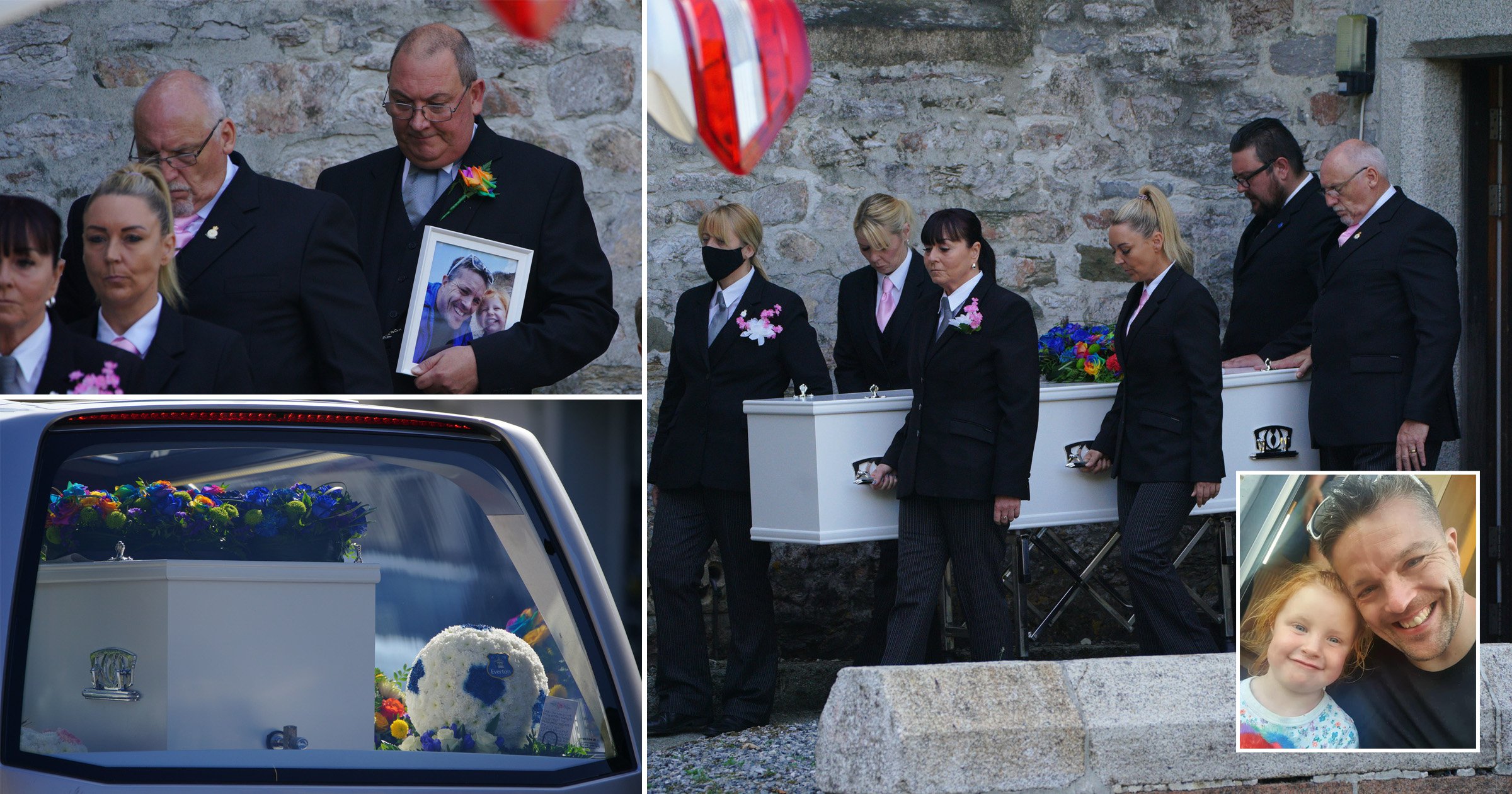 The funerals of a dad and his daughter who were both killed in the Plymouth shootings have been been held in the Devon city.

Lee Martyn, 43, and Sophie, 3, were among those shot by Jake Davison in a 12 minute rampage in the Devon city on August 12.

Their funeral took place this morning at the Church of St Andrews in Plymouth.

Mourners watched as a single coffin was taken into the church draped in floral tributes and a white Everton FC football.

Mr Martyn and Sophie were shot in the street by Davison who had already killed his mother, Maxine, 51, at her home in the Keyham area.

The pair had been walking their pet dog on Biddick Drive when they encountered the gunman.

Davison then shot Stephen Washington, 59, in a nearby park, before shooting Kate Shepherd, 66, on a neighbouring street. He then turned the gun on himself as armed police surrounded him.

About 300 people filled the church for the funeral, many dressed in black. Others waited outside during the hour-long service.

Eye witnesses said Mr Martyn died trying to protect his daughter who he adopted with wife Becky two years ago.

He was shot in the back by Davison from 15ft and fell onto his daughter to try to save her but both were shot again at close range.

Friends and family paid tribute to the pair last month as news emerged of their deaths.

Jess Morcom, a cousin of Mr Martyn, said: ‘When someone passes it’s often the norm to say how they were the world’s nicest person etc etc, but I really do mean it from the bottom of my heart when I say that that was Lee.

‘He had the kindest heart, would do anything for anybody and you only had to take one look at him to see how much he loved and adored his family, Bex and his children.

‘I was always so proud to be able to say you were my cousin. The world is going to be a much darker place without you in it.’

Speaking about Sophie, she added: ‘Beautiful little Soph my darling, how truly blessed we all were to have seen you grow into such a beautiful funny and clever girl for the three years that we had with you.

‘My heart hurts so much thinking about how it should have been so many more. I will miss your cheekiness and your dancing the most.’

Inquests into the deaths of Davison and his five victims have been opened and adjourned by a coroner. They all died from shotgun wounds.

Davison’s social media usage suggested an obsession with ‘incel’ culture, meaning ‘involuntary celibate’, as well as an interest in guns and the US.

He had received mental health support from a local service and reports have suggested his mother had been struggling to get help for her son.

Since the shootings three separate inquiries, by the Plymouth coroner, the Independent Office for Police Conduct (IOPC) and the National Police Chiefs Council (NPCC), are under way.