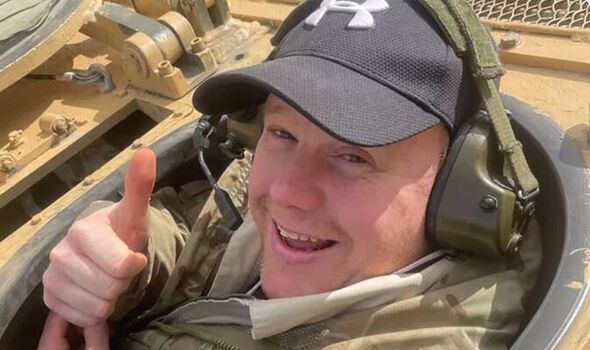 A father is fighting for his life in a coma after being struck by a vehicle as he walked home from the pub.

Craig Williams has spent two weeks in an induced coma since the alleged hit-and-run in Macclesfield, Cheshire. The 40-year-old man had just captained his pool team to victory at his local pub and was making his way home when the horror happened on November 3.

Craig’s wife Louise has held a vigil beside the hospital bed every day since the crash.

“You don’t expect this to happen to you. It’s the one phone call that everyone dreads,” she said.

“Craig loves playing pool every week and he was in a great mood that night as he had actually won against one of the best players.

“It’s hard to put into words how he’s doing now. He’s fighting for his life and in a critical condition. He’s been put into a medically-induced coma.

“Until he comes around we don’t really know anything but we know that because of his injuries he’ll need rehabilitation. He won’t be able to use crutches due to his injuries and so he may need to use a wheelchair.”

Craig, who married Louise in 2019, has suffered multiple life-threatening injuries. Police are appealing for witnesses to the incident, Cheshire Live reports.

According to police, a white Volkswagen Golf and a black vehicle on the A537 were also involved in the incident, with the black vehicle allegedly having left the scene.

Craig, who has two children from a previous marriage, has a “larger-than-life” personality, devastated Louise said.

Louise, a domiciliary complex care worker, added: “Everybody asks me how I am doing and I can’t really answer. I don’t know. It’s like my world’s fallen apart and it’s stopped and feels like a dream.

“I work in care and when I’m at work I put on a brave face and go and deal with it and then I come home and cry. Underneath, it’s breaking my heart.

“He is a larger-than-life character and he always tries to be happy. I have told him that when he comes home I will never complain about him snoring again.”

Friends and relatives have joined Louise each day to at Craig’s bedside at Manchester Royal Infirmary.

Craig’s colleague Chris Wilcock has set up a Go Fund Me fundraiser for Craig’s rehabilitation when he comes out of hospital.

It reads: “Since Craig was admitted to hospital just under two weeks ago there has been some positive progress. There have been a number of operations to start to repair his ribs, pelvis and bladder.

“The medical team looking after him are confident that he has not sustained any spinal or brain injuries and are also hopeful of reducing the sedation and bring him around. There is still a long road ahead and expectations of recovery time could be 6-8 months.”

Craig and Louise’s friend and fellow pool player Lee Holmes, chair of the Macclesfield pool league, said: “It’s horrible. It could have happened to any of us. Craig was on his way home after playing pool and just over two weeks later he is still in an induced coma and on a ventilator.

“I contacted him about the pool captains’ meeting and spoke to him a couple of hours before it happened. I spoke to his wife and the list of injuries is horrific.

“It came as a real shock when it happened and as a league we have all come together. We’ve raised over £1600 so far through the Go Fund Me account. People from the local Slimming World have donated and people who have never even met Craig, which is wonderful.

“We want to try to take a little bit of pressure off his wife. Once he pulls through his injuries are going to be that bad that it’s going to be some time before he can get up and running again.

“If you can’t be nice in someone’s hour of need then when can you be? Local companies and groups have been giving donations left, right and centre like a local hairdresser’s and the football club. We’d like to thank each and every one who has donated and given their time. Without them, this would not be possible.”

A fundraising event is also taking place at the Pack Horse Bowling and Social Club at 3pm on December 4, with various activities planned including a raffle and tombola and pool competition.

To donate to the appeal, visit this link.