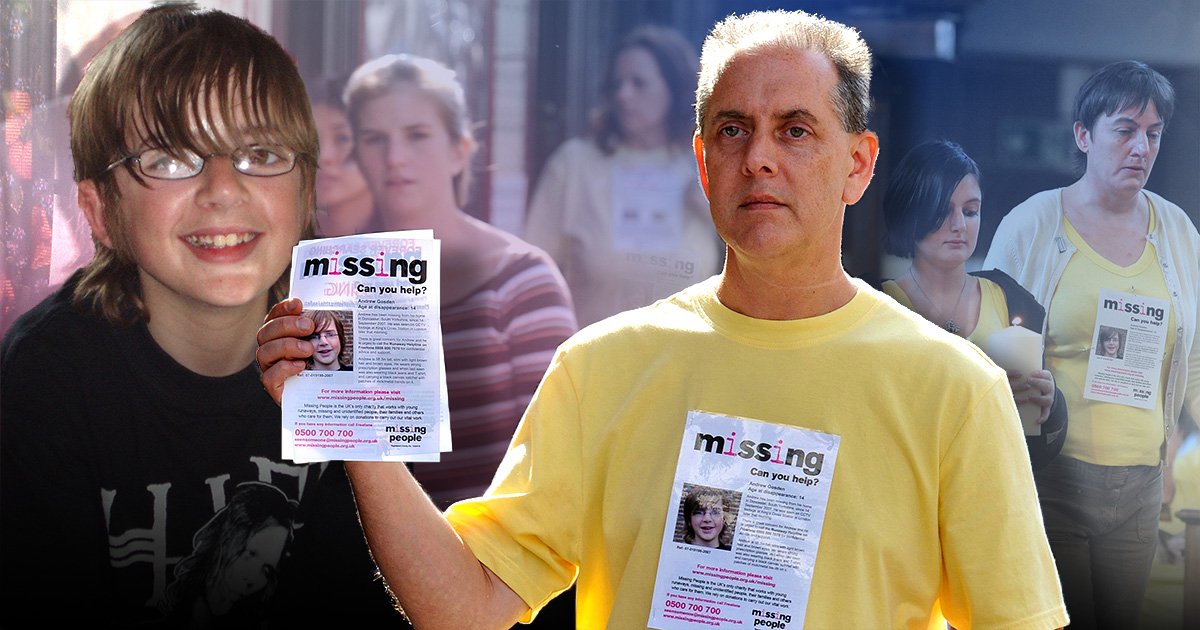 As he prepares to mark the 15th Christmas without his son, time has done nothing to dim the ‘gut-wrenching’ pain felt by Kevin Gosden.

Kevin will light a candle for Andrew and share memories of the 14-year-old, who went missing after taking a train from Doncaster to London.

The bright student’s last known movements were caught on CCTV at King’s Cross station on September 14, 2007.

Kevin, 57, spoke to highlight the vital importance of people of all ages who are experiencing crisis to reach out for help and support amid times of heightened isolation and financial pressure.

‘This time of year is always difficult,’ he said. ‘We have got into the habit of lighting a candle on days like Christmas and Andrew’s birthday just to signify a little hope of finding out what happened to him.

‘We do talk about him and swap some memories, which usually makes us laugh because he was very witty.

‘We are the sort of people who would rather know the worst, we would rather have a bag of bones that could be DNA tested and matched than just not having the slightest idea what could have happened to him.

‘The thing we struggle with most is not having the slightest idea what happened to Andrew. 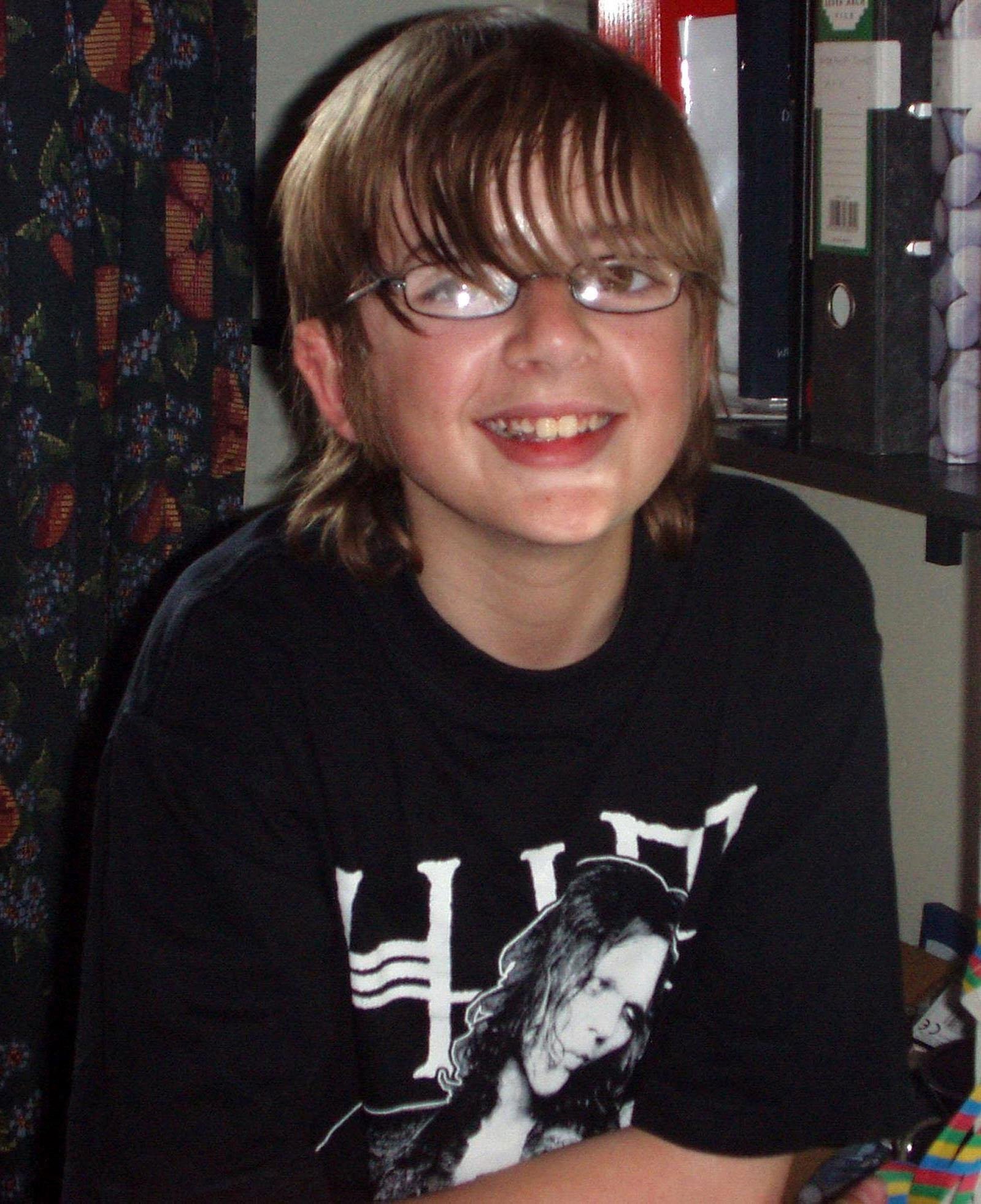 Andrew, who would be 29 now, returned from school to the family home in Doncaster, South Yorkshire, while his parents were out before changing out of his uniform and withdrawing around £200 from his bank account.

He bought a one-way ticket to King’s Cross, where his last known movements were caught on CCTV on the morning of his disappearance.

The teenager vanished four months after Madeleine McCann disappeared in Portugal and he remains at the centre of one of the most high profile missing people cases of the last 20 years.

In an open letter asking him to make contact, his family describe him as ‘witty, polite, caring and intelligent’.

Kevin and his wife Glenys, 58, will not be the only parents marking Christmas while a child remains lost in their lives.

Overall, there were 353,000 incidents across all ages, according to the National Crime Agency statistics developed by the Missing People charity.

‘It’s crucial that young people reach out for help if they feel like going missing,’ Kevin said.

‘They are already having to navigate through school without the other pressures such as the lockdowns and county lines over the past two years.

‘My message is, if you feel like going missing, don’t walk, talk and ring Missing People. If I could I’d go round every Year 7 assembly in the whole of the UK and tell the children to put the number in along with Childline and the Samaritans.

‘There are volunteers who are good listeners and are trained to help you with things that might be incredibly difficult to talk about, even with your friends and family.

‘I would also ask parents to make sure those numbers are saved in their children’s phones, and make sure they know what they are there for, as soon as they get a phone.’

Kevin, from Doncaster, spoke to highlight a preventative campaign by Missing People where people who might be thinking of going missing are encouraged to call a free and confidential helpline.

The UK-wide appeal, also aimed at those who might have information about someone who has disappeared, is being run in partnership with bus operator Stagecoach, which is running messages on its tickets.

The campaign has been launched in response to the cost of living crisis as people come under increasing financial pressure.

Another collaboration is being run with c2c, with the rail line joining the charity’s network of organisations that it can send briefings to when intelligence suggests staff have come into contact with a missing person.

As Kevin prepares to mark Christmas with close family including daughter Charlotte, 31, and her three-year-old son, the sense of worry is as raw as it was on the day when Andrew vanished while his parents were at work.

‘Unfortunately it has not happened in our case, but most people are found after missing people appeals or return of their own volition,’ Kevin said.

‘It’s less usual that someone like our Andrew disappears off the face of the earth. It’s nevertheless an incredibly worrying time.

‘It’s a bit like when kids are little and you lose sight of them in the shopping centre or park or wherever and you have that little bit of panic. We have had that same horrible, gut-wrenching sense of panic every day for 15 years.’

A glimmer of progress in the case came in December 2021 when two men were arrested by South Yorkshire Police for kidnapping and trafficking in connection with Andrew’s disappearance.

Detectives, assisted by officers from the Metropolitan Police, apprehended the men, then aged 38 and 45, in London.

Electronic devices including mobile phones were seized at the time before the men were released while the investigation continued.

In January, the Times reported that examination of the devices could take up to six months. Kevin has not had any further news since the arrests.

A message to Andrew

We have all missed you so much since the day you left.  Not a day goes by that you are not in our minds constantly. You were always so witty, polite, caring and intelligent that we desperately miss your company. The same is true of all your friends and the thousands of people who have prayed for you and helped us search for you.

We do not care where you have been or what lifestyle you choose for yourself. We only want to know that you are safe and well and to help and support you if we can.

If you should ever read this, forget about any water under the bridge and please have no fear about making contact with us.

We remain as proud of you as we have always been and love you deeply,

‘It’s been weighing on our minds,’ he said.

‘It feels like we’re stuck at the traffic lights and a juggernaut is going to slam into us. If they don’t have any evidence then we’re way back to square one, but if they do there will obviously be some unravelling from thereon in and I doubt that will be pleasant either.

‘It’s a no-win for us but we are pleased that the police are looking into it and doing what they can to help.’

South Yorkshire Police told Metro.co.uk this week that there have been no ‘significant changes’ in relation to the case and the two men who were arrested remain under investigation.

Stagecoach tickets carry the message: ‘If you feel like disappearing or know someone who has gone missing, find “Missing People” for support. Call the free helpline on 116 000 which is confidential and non-judgemental.’