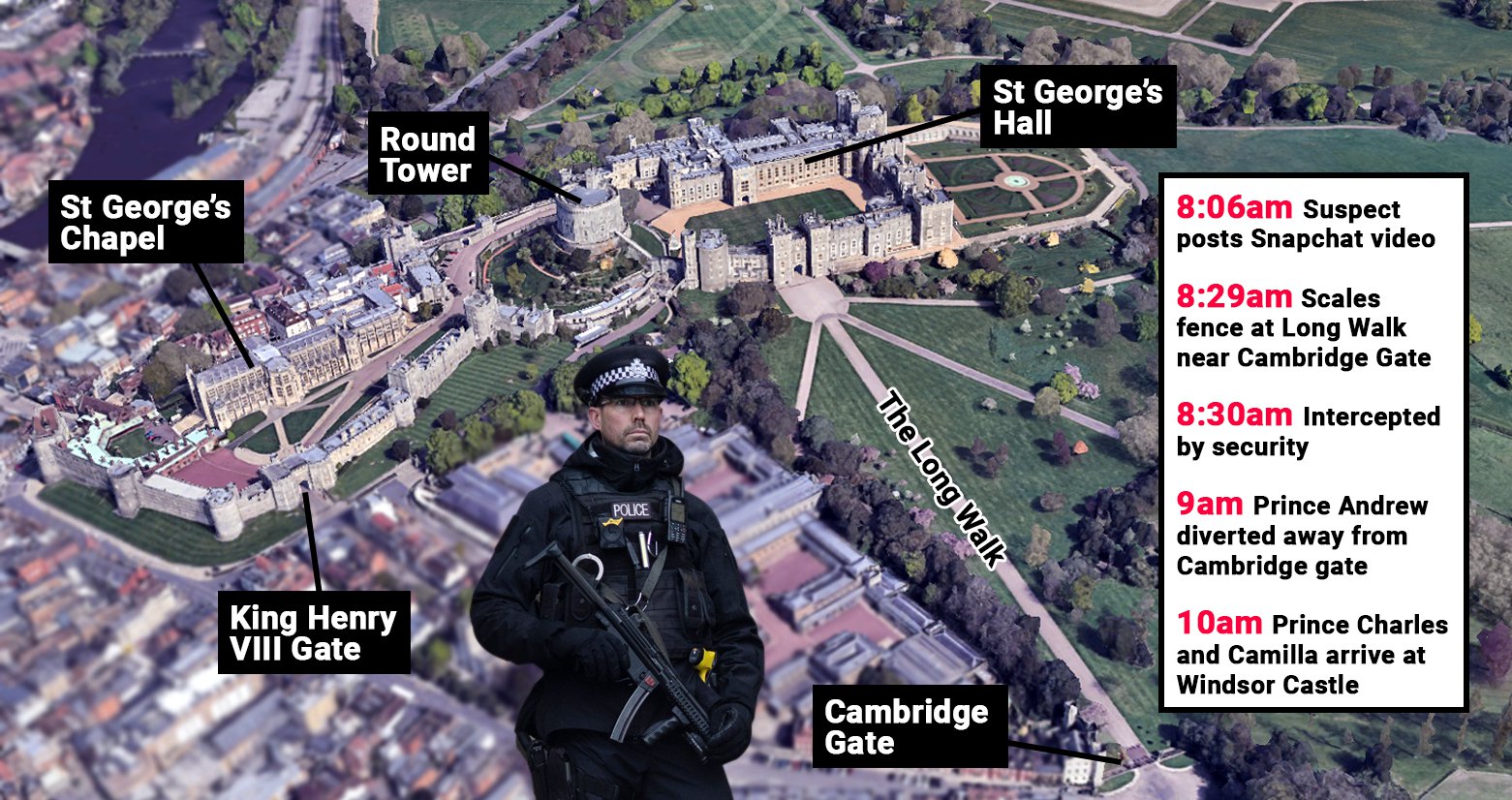 The father of the suspect accused of scaling Windsor Castle on Christmas Day armed with a crossbow today said ‘something’s gone horribly wrong with our son’.

Jaswant Singh Chail is said to have used a rope ladder to climb a metal fence at the royal grounds around 8.30am, sparking a huge security alert.

The 19-year-old was detained under the Mental Health Act after being arrested on suspicion of breaching or trespassing a protected site and possession of an offensive weapon.

Now Scotland Yard is investigating a video of a masked man allegedly revealing a plot to ‘assassinate the Queen’ in a ‘revenge’ mission.

Chail is alleged to have sent the video from his Snapchat account 24 minutes before the incident at Windsor.

Detectives are currently ‘assessing the contents’ of the footage.

His father, Jasbir Singh Chail, 57, told MailOnline: ‘Something’s gone horribly wrong with our son and we are trying to figure out what.

‘We’ve not had a chance to speak to him but are trying to get him the help he needs.

‘From our perspective, we are going through a difficult time.

‘We are trying to resolve this issue and it’s not easy.’

The Snapchat video, said to have been inspired by Star Wars, described plans to avenge the victims of the Amritsar massacre, known as the Jallianwala Bagh massacre, on April 13, 1919.

Hundreds of people died after protestors peacefully demonstrating against British colonial rule were trapped and shot down.

The hooded figure tells viewers: ‘I’m sorry. I’m sorry for what I’ve done and what I will do.

‘I will attempt to assassinate Elizabeth, Queen of the Royal Family.

‘This is revenge for those who have died in the 1919 Jallianwala Bagh massacre.

‘It is also revenge for those who have been killed, humiliated and discriminated on because of their race.

‘I’m an Indian Sikh, a Sith. My name was Jaswant Singh Chail, my name is Darth Jones.’

Chail, known to friends as ‘Jas’, is said to have been raised in a £500,000 semi-detached home on a private estate in North Baddesley, a middle-class area in Southampton, according to the Mail.

The incident on Christmas Day has triggered fears for the Queen’s safety – as Princess Diana’s former bodyguard warned security needed to be ‘beefed up’ to avoid a ‘tragic scenario’.

And the former head of the royal protection unit also suggested Windsor is ‘having an issue with intruders’, urging staff to deal with the problem before ‘something more sinister comes to pass.’

The alleged break-in left a ‘chill in the air over what could have been’, royal sources said.