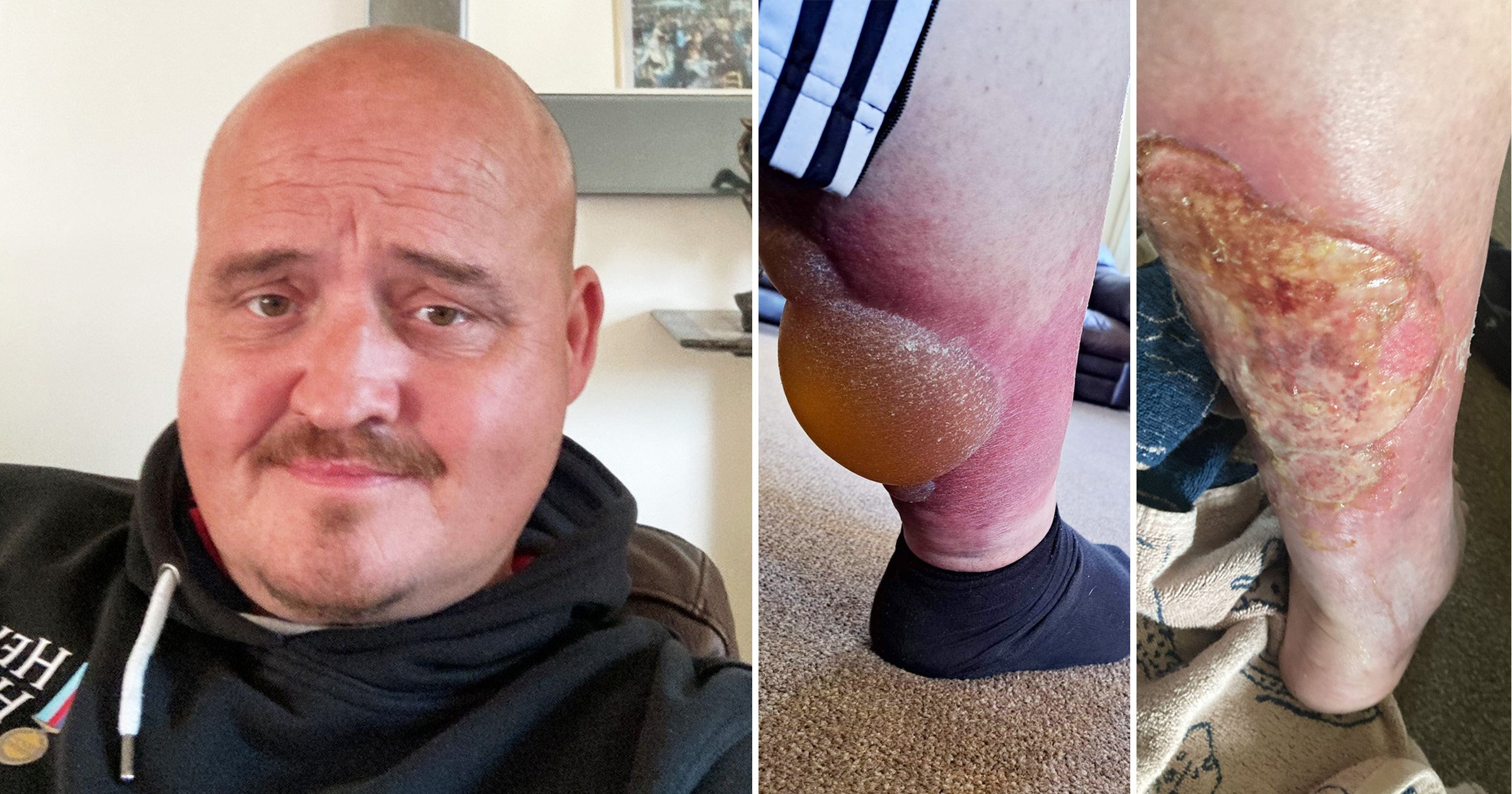 When Nathan Green woke up the morning after a boozy trip to the pub, he realised he had more than just a hangover.

The 50-year-old tug company manager, from Lowestoft in Suffolk, said he woke up on June 13 feeling ‘like he’d been run over’ and thought he’d been spiked.

His wife Dawn encouraged him to go to A&E after he noticed a growing blister on the back of his leg.

Nathan said: ‘I was in the beer garden on a Sunday, it’s my day off and I like to sit there, listen to the band and have a few beers.

‘It was a hot day and I was out in the garden enjoying myself and talking to my mates.

‘I felt something go up and tickle my leg a bit so I brushed my leg like you do. I didn’t really think a lot of it.

‘I was drinking away quite merrily and when I got home I started shaking and felt cold. I felt really rough and remember thinking, “This ain’t right.”

He said by the next day his ankle was bright red and ‘three times the size it should be’.

‘By the time I got to A&E it had turned into a small football, every time I looked at it it got bigger,’ Nathan added.

‘The woman looked at it and said, “You’ve been bitten by a false widow spider.”‘

Doctors at James Paget University Hospital’s A&E department in Great Yarmouth, Norfolk, said he was going into anaphylactic shock and immediately hooked him up to an antibiotic IV drip.

They cut and drained the huge blister and dressed it, as well as giving him strong painkillers.

‘You wouldn’t think a little spider could do so much damage, it’s unbelievable,’ he said.

‘I’ve been jumping around on boats and oil rigs all over the world and I’ve walked through jungles and swam in rivers, you name it I’ve done it, and I go to a pub and get bitten.

‘Before [this happened], if my family saw a spider I would pick it up with my hand, open the window and throw them outside, they never worried me at all.

‘But after getting whacked like this I’m cautious. If it has a skull on its back or looks like it may have a skull, they’re getting it.’

Thankfully his leg is almost fully healed three months later, and he’s now urging people to be aware and get medical help straight away if they are bitten.

He added: ‘It’s up there with the worst pain I’ve ever felt, I wouldn’t wish this on my worst enemy.

‘Three weeks later I was still hobbling around like an old man.

‘The hospital said If I’d left it later it would have caused more damage to my leg.

‘My advice to anyone who gets bitten is to go and get it checked out. I’m a hardened “I’ll-work-until-I-drop” type of geezer and I’m glad my wife insisted I go to A&E.’