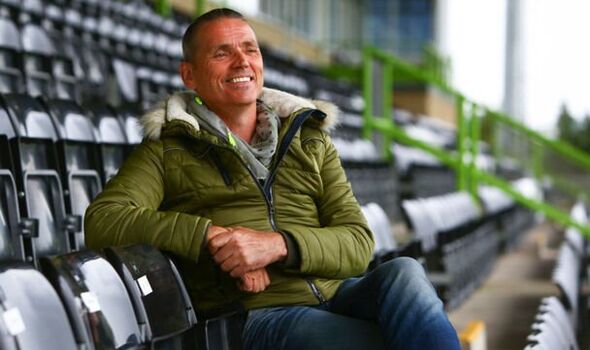 Environmentalist and entrepreneur Dale, 60, broke new ground when he launched his renewable energy company back in 1995. He lead the way again in 2010, buying EFL League Two side Forest Green Rovers.

Dale transformed Rovers into the world’s first carbonneutral and vegan football club, hailed by Fifa as the “greenest team in the world”.

Amid the crippling cost-ofliving crisis, and with our fossil fuel dependency on foreign powers exposed by war, he now badly wants Britain to seize a once-in-a-generation chance to launch a renewable energy revolution.

Dale, of Stroud, Gloucs, will “pass the baton” to a likeminded new owner of Ecotricity with the financial clout to “turbocharge” the firm and pump more cash into large-scale green projects.

His own energies will be directed into changing the political landscape and Net Zero policies of Britain with a green “industrial revolution”.

He told us: “As a country, we have enough wind and sun, forget tides and waves, to power ourselves 20 times over.

“We can be truly independent, we can have bills that never go up.

Passionate “We can end fuel poverty in our country and create hundreds of thousands of long-term jobs in this entirely new, clean industry.”

Dale – who in the past has publicly supported the Green Party, Labour and Lib Dems – said standing down will let him achieve a long-standing ambition and “play a part in the next general election”.

He said: “The Labour Party have a real commitment to net-zero and on social justice and that side of life I feel a bit in the Labour Party.

“The Conservative Party are split on energy policy. They talk about energy independence but parts of the Government say they can do it with fossil fuels, fracking, the North Sea or nuclear power – the old way – then you have others talking about solar and wind projects [which is] the right way… “What we lack are politicians that get it and the policies that will help make it happen faster.”

Dale, the son of a lorry driver, first got passionate about green energy when he built a wind turbine to power the old ambulance he lived in after leaving school at 15.

He founded Ecotricity from a single windmill in Gloucestershire. The firm now has a turnover of £300million.

It supplies energy to some 200,000 homes and businesses and employs more than 800 people.

Former benefits claimant Dale, who is worth an estimated £100million, got an OBE for services to the environment and the electricity industry in 2004.

Recently he urged the Government to impose a windfall tax on North Sea oil producers and called for a public inquiry into the chaos in Britain’s energy market.

Accountancy firm KPMG will preside over the sale of Ecotricity but Dale will have the final say on who the new owner is.