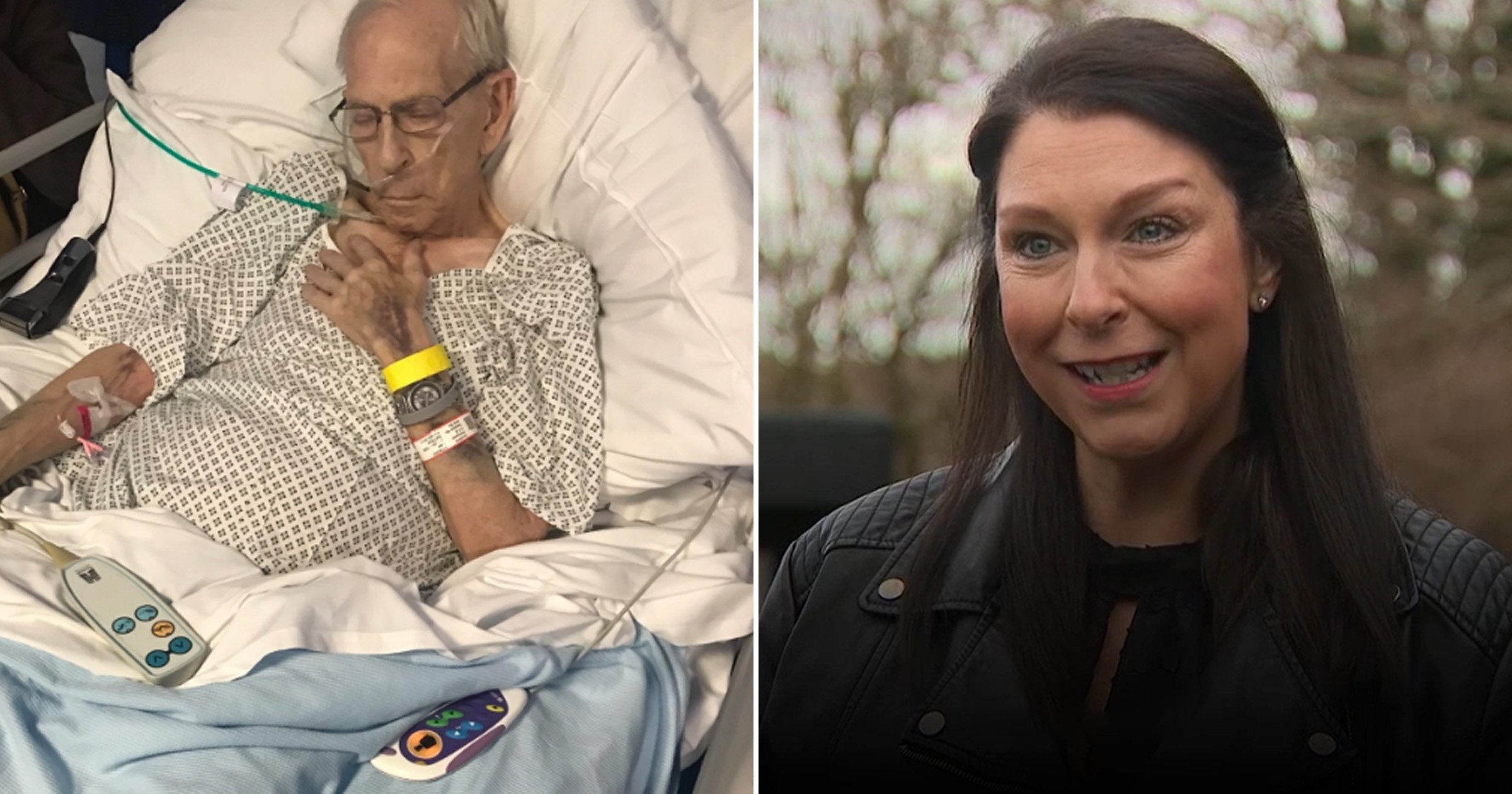 It’s been exactly a year since the UK’s first coronavirus death, and the victim’s family still have doubts over when the bug first arrived in the country.

The passing of Peter Attwood, 84, from Chatham, Kent, was initially blamed on heart failure and pneumonia, and it was not until the end of August that tests confirmed he died of Covid-19.

On January 31, one day after Peter’s death, Public Health England confirmed what they believed to be the UK’s first coronavirus cases – two Chinese nationals in York.

But Peter was in hospital for several weeks before this with very similar symptoms, making his daughter Jane Buckland question how long the virus had been in circulation for.

While she has no proof, she believes she and her daughter had Covid-19 a week before Chinese authorities first made an announcement about the disease in December.

She told Sky News: ‘We saw how these people were dying, how ill they were and their respiratory problems, how their lungs were filling up and they couldn’t breathe. That was my dad.

‘And with both me and my daughter being really poorly before Christmas as well with the temperature, with the sore throat, with the cough, all the symptoms. I was adamant that that was what had happened to my dad.’

As her father ‘hadn’t even stepped outside the country his entire life’, Jane finds it hard to believe that the virus hadn’t started making its way around the world, including to Britain, sooner than reported.

Demanding more transparency from Beijing, she added: ‘How are the Chinese saying there were only 34 deaths in January when my dad was already in hospital suffering with these symptoms?’

One year on, the Government on Friday said the death total now stands at 104,371 after reporting a further 1,245 people had died within 28 days of testing positive for Covid-19.

Separate figures published by the UK’s statistics agencies for deaths where Covid-19 has been mentioned on the death certificate, together with additional data on deaths that have occurred in recent days, show there have now been 121,000 deaths involving coronavirus in the UK.

When the first two Covid-19 cases were confirmed in the UK on January 31 2020, it was thought at that time the risk of onward transmission was very low.

Two Chinese nationals who had recently arrived were staying in a hotel in York when one of them fell ill and was taken to hospital. Both later tested positive for coronavirus.

At that time, the UK’s chief medical officer Professor Chris Whitty said Britain had been preparing for cases of novel coronavirus , adding that ‘we have robust infection control measures in place to respond immediately’.

But soon, community transmission began to take hold and the UK’s first coronavirus death was reported on March 5.

This timeline was moved further back when in early September, a coroner revealed Peter Attwood had died of Covid-19 in January.

Meanwhile, a coronavirus tracking app designed by scientists at King’s College London, also hinted at sustained community transmission of coronavirus in the UK as early as December.

This is much earlier than the first confirmed case of transmission inside the UK, which was registered on February 28 in Surrey.

Tim Spector, lead scientist on the Zoe Covid Symptom Study app and professor of genetic epidemiology at King’s College London, said that the while their research was designed to track people who were symptomatic, there were many who were reporting their symptoms retrospectively.

He said: ‘We were seeing large numbers of people reporting classic Covid symptoms from between Christmas and New Year, and in come cases, before that.’

Prof Spector said although data from the Zoe app comes from biased and self-selecting sample, it suggests that there were clusters of people who had returned from ski trips in Europe over the festive period and ‘got sick immediately they came back’.

He added: ‘There is no doubt in my mind there were real genuine cases around in December and there are anecdotes of earlier cases of people with classic Covid symptoms.

‘Of course, I can’t confirm this with scientific certainty, but we do know now that many of the ski resorts were epicentres of Covid.’

While the official case count did not rise above 100 until March 6, there were many who suspect they may have had Covid-19 in early January 2020, or even December 2019.

Last year, author Catherine Mayer spoke about how she believed her late husband Andy Gill, guitarist and co-founder of Gang Of Four, may have been one of the earliest to be struck down by Covid-19.

He died of pneumonia at St Thomas’ hospital in London on February 1 after returning from a tour in China on November 23 2019.

And while China first reported cases of coronavirus on December 31 2019, government data seen by the South China Morning Post suggests the first known case was observed on November 17.

Dr Nathalie MacDermott, NIHR academic clinical lecturer from King’s College London, said that looking retrospectively at cases of illness of patients who ended up in intensive care, there may have been ‘some degree of community transmission in the UK prior to the first cases being identified’.

She added: ‘Proving that, however, can be difficult, unless we can test samples that was stored for those patients.’

Prof Spector also agrees that finding the data for community transmission in early January or December would be a challenge but added looking at patients who had lung scans or testing sewerage water samples from that time could offer insight.

Meanwhile, recent research from the UK’s Covid-19 Genomics UK (Cog-UK) consortium found that coronavirus was introduced to the UK more than 1,000 times during the first wave of the pandemic – between January and June 2020.

Scientists involved in that research said earlier travel and quarantine interventions could have helped reduce the intensity of the UK’s first wave of cases.

But Dr MacDermott believes imposing restrictions earlier would have been difficult because the tools for coronavirus surveillance were limited.

She added: ‘I think it is easy to say a lot of things in hindsight and we have to remember what information we had at the time when those decisions were being made.

‘And obviously at the time, there was really no good justification for putting in an all-out travel ban, or putting in lockdown measures, because we didn’t understand this virus to be as transmissible as it turned out to be.

‘We were very dependent on China at that point, because we did not have a lot of transmission anywhere else in the world, so that information was limited.