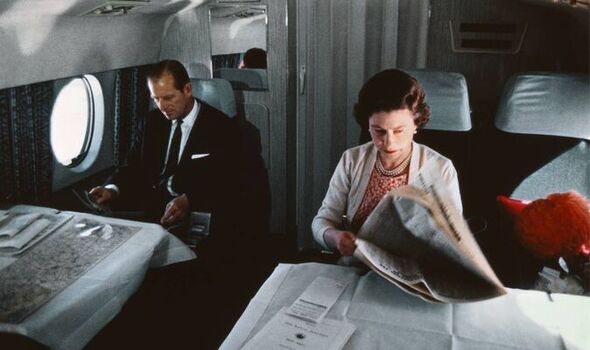 On October 25, 1960, an RAF Comet airliner carrying the Queen and Prince Phillip was flying back to London from Denmark. It was buzzed by a pair of F86 Sabre fighters carrying out a “practice interception” near the Dutch-German border

What was not revealed then was just how close the German jets came. This was only disclosed in a letter from the Air Ministry to Prime Minister Harold Macmillan the day after the incident.

“Two Sabres passed approximately 100 feet above and 200 feet to one side of the Comet,” the private note revealed.

A British inquiry reported in November 1960: “The F86 aircraft were carrying out a battle formation exercise from Oldenburg.”

“They saw condensation trails at 10 to 15 miles and closed on them from an ahead position until they recognised what they subsequently described as a ‘transport or bomber-type aircraft’. The fighter pilots were evidently not aware of the identity of the aircraft or that Her Majesty was a passenger.”

The inquiry also found the base commander at Oldenburg failed to warn his pilots of the royal aircraft’s return journey.

Air Secretary Julian Amery told the West German defence minister: “Members of Parliament will want to know how two of your aircraft came to practice interception on a Comet in which The Queen was travelling… The base commander must bear the responsibility”.

However, the Germans refused to accept the blame. The Foreign Office told the PM: “They were strictly within the letter of the law in using the Queen’s Comet for a ‘practice interception’, but it was obviously a very silly thing to do, and they did not realise that the Queen’s aircraft was involved.”

Ministers agreed the German Air Force should not be publicly blamed and Mr Amery did not criticise the air base when speaking to MPs.