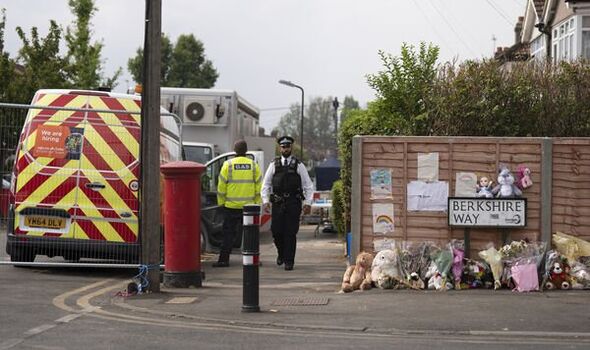 Sahara Salman lost her life in the blast in Thornton Heath, South London, just one month before her fifth birthday. Three other people were injured in the explosion in Galpin’s Road, which led to the collapse of a terraced home, and saw the evacuation of hundreds of residents. Two people are still recovering from severe injuries.

Mitcham and Morden Siobhain McDonagh MP brought members of the community to the House of Commons where she led a debate on the issue.

She read out a highly emotive statement from Sahara’s mother Sana Ahmed, and said neighbours felt ‘lucky to be alive’ after the blast in their street.

The statement from Sana Ahmed said: “My four children and I are victims of a gas explosion.”

I made the phone call to SGN on July 30, 2022, to save every single resident on Galpin’s Road.

What did I get as a result? I tried to help and warn of this gas explosion, but my own daughter and our family are victims of such an explosion just days later. A dead child.

“I am the one who lost my beloved daughter, how does this make any sense?”

“I called that number and I’ve been sentenced to life.”

“What I find absolutely outrageous is that 10 weeks after this horrific tragedy my children and I sleep on the floor as if we have not been through enough, why have we not been offered housing?”

Ms McDonagh said she has pushed Merton Council to urgently sort out the housing situation of the grieving family, who were watching the debate online.

The Labour MP said: “Residents were asked to move out of their homes with no notice, no belongings and no idea when they would return, many have remained evacuated to this day.
Their strength and fortitude has been nothing short of remarkable.”

Residents said they had reported a strong gas smell in the two weeks before the explosion, at 7.10am on August 8.

Ms McDonagh added: “Those same residents need the investigation to confirm their concerns had been heard.”

“They need it to establish why the problem took so long to fix and they need the investigation to determine whether the reporting mechanism for smelling gas is fit for purpose and how this tragedy happened. We must ensure that it never, ever happens again.”

She said more support should have come from the government and claimed it took seven weeks to get a response to a letter for more help.

Housing Minister Lee Rowley said the Government had been in touch with Merton Council about applying for the Bellwin scheme which provides emergency financial assistance to local authorities.

Mr Rowley added: “I would like to pass on my condolences to the family of Sahara and send my best wishes to Sana and her family and say thank you to all the residents for coming at such a difficult time.”

“I hope the Metropolitan Police and the Health and Safety Executive complete their investigation quickly.”