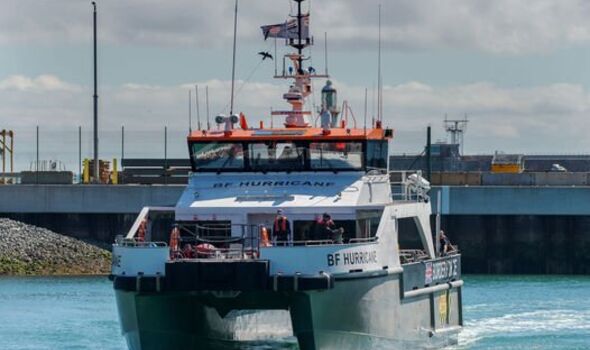 Home Secretary Priti Patel spoke with her Albanian counterpart – Bledi Çuçi – on Tuesday night to strengthen the returns agreement with Tirana amid an influx of arrivals on small boats in recent weeks.

Government officials believe around 60 per cent of migrants making the crossing each day are now Albanian.

And a senior police chief will be deployed from Tirana to the UK to provide intelligence on people crossing the English Channel.

Border Force officers are speculating a crackdown on Albanian networks in the UK is fuelling the surge in crossings.

They say crime lords are replacing people who have been arrested or deported.

An official said: “We are seeing people who are not known to us. They are people who have never had a foot in the UK.

“We know some of those coming through this route do so to take part in serious organised crime”.

And sources said immigration officials would speed up the processing of asylum claims – many of which are “spurious” and send the illegal immigrants straight back.

Officials say Albania is a “safe and prosperous country” and stressed the migrants have crossed a number of EU countries to reach northern France.

This, the Home Office says, makes the vast majority of claims inadmissible.

A source said: “Anyone who is coming in and is inadmissible – we will speed up how quickly they are processed and turn them straight back round.”

“We want to fast-track their asylum claims.”

The Home Office has removed nearly 1,000 Albanian criminals from Britain since Priti Patel signed an agreement with the country to return nationals with no right to be here.

The majority of a record-breaking number of migrants who arrived in the UK were from Albania, according to reports from Border Force officers.

More than 700 out of the record total of almost 1,300 migrants who were brought ashore on Monday were Albanian.

The Home Office is also launching a new social media campaign targeting Albanian speakers to fight against the “lies” told by people smugglers.

The vile criminals are targeting migrants by warning them they must make it to Britain before the Rwanda policy takes effect.

They claim the only way to avoid being removed from the UK on a plane to Rwanda is to make the journey before the new prime minister is installed.

Albanian adverts join those launched earlier this summer in key locations in France and Belgium, in the languages most frequently spoken by small boat arrivals.

“This abuse of our immigration system and people risking their lives cannot go on.

“Thanks to our excellent levels of co-operation with Albania, we will take every opportunity to speed up removals of Albanians with no right to be in the UK.

“I want to thank my counterpart Bledi Çuçi for the work he and his Government are doing – we are both steadfast in our commitment to stop this trend.”

Minister for Interior Affairs of Albania Bledi Çuçi, said: “We discourage these illegal and dangerous practices.

“The Home Secretary and I also discussed mid-term solutions to provide better opportunities for young people, and means of legal migration that enables skilled professionals and labour access to the UK.”

Albanian gangs are also offering free minibus trips from southern Europe to the northern French coast for those wanting to cross the Channel, it emerged yesterday.

So far in August 6,458 people have been recorded making the crossing, which is already higher than any monthly total for the year so far.

To date, the highest monthly total for crossings on record is November 2021

The TikTok advertisements promise “bargain” prices and Channel crossings that have “never been cheaper”.

An Albanian immigration source said: “The Albanian gangs provide the people and link up with the Kurds, who provide the boats and the logistics.

“The Albanians are coming for economic reasons.

“There is huge poverty in Albania and they want to get to the UK for a better life and good employment.

“Most end up working in the black market, especially in construction.

“Some of them – especially the younger boys – get involved in criminality, working in cannabis farms, in order to pay off the £5,000 they have paid for the crossing.”