The defence secretary has saved 500 troops from a planned cut in army numbers at a time of growing threats, though the force will still shrink by 9,000 posts to 73,000 to save money, Sky News understands.

Ben Wallace is set to focus on capability rather than mass on Thursday as he sets out an overhaul of the army, described as the most “radical” restructuring in more than 20 years.

It will see a greater reliance on robots, computers and data, while servicemen and women will be expected to be more capable, with an increasing focus on specialist skills. 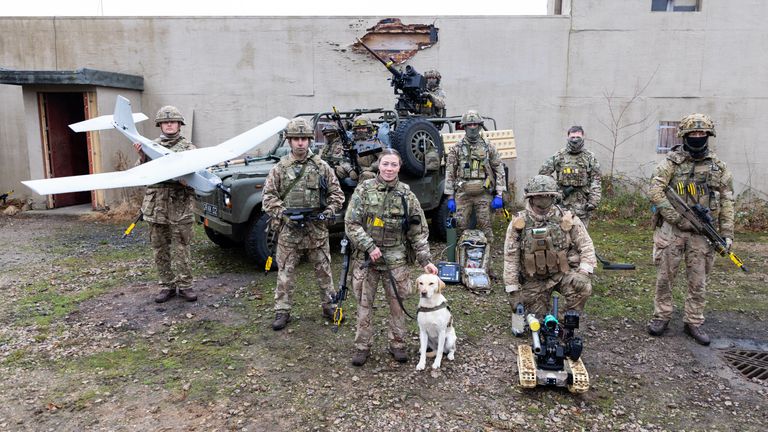 One new element will be the creation of a 1,000-strong Ranger Regiment, supported by dozens of additional expert troops, with the ability to conduct special operations missions, typically in partnership with local troops in Africa, the Middle East and Eastern Europe.

The reversal of 500 planned job cuts is the equivalent of two Ranger battalions.

A senior defence source told Sky News Mr Wallace had previously said “the size of the army was based not on a figure picked out of the air but on ambition and threat”.

The Ranger Regiment models itself on the Green Beret special forces in the United States, a second-tier special forces unit that complements the first tier Delta Force and Navy Seals.

Due to be stood up from 1 December, Britain’s Rangers will be recognised by a new Peregrine Falcon cap badge – chosen because it is the bird of prey with the most global footprint “operating in all environments including deserts, mountains and cities, and notably loyal to its partner”, the army said. All members of the regiment, who must pass a special selection, will also wear grey-coloured berets – the same colour as the falcon’s feathers, but also a nod to the role the troops will play operating in what is described as a grey zone of hostilities under the threshold of war.

Brigadier Gus Fair is commander of the newly established Special Operations Brigade, which will include the Ranger Regiment.

Asked whether people took the British army seriously given its diminished size, he said: “Yes. I think it’s fair to say pretty much down to every individual we have got more capability represented at every level now than has ever existed previously.”

Subscribe to Into The Grey Zone podcast on Apple Podcasts, Spotify, Spreaker

Rangers will be able to operate in smaller groups than the regular army and be more self-sufficient.

They will partner with local troops or militias.

As well as being ready to shoot rifles, the Rangers will also work with troops armed with cameras and ready to publish images of what they are doing to counter any attempt by enemy forces to spread fake stories about their work aimed at undermining the mission.

An earlier plan to cut the regular army to 72,500 troops by 2025 was announced in March as part of a wider government review of defence, security and foreign policy.

The reduction now to 73,000 soldiers is set to be achieved without the need for a redundancy programme. No cap badges are expected to the lost, with the shrinkage achieved through structural changes, for example in the size of certain infantry groups.