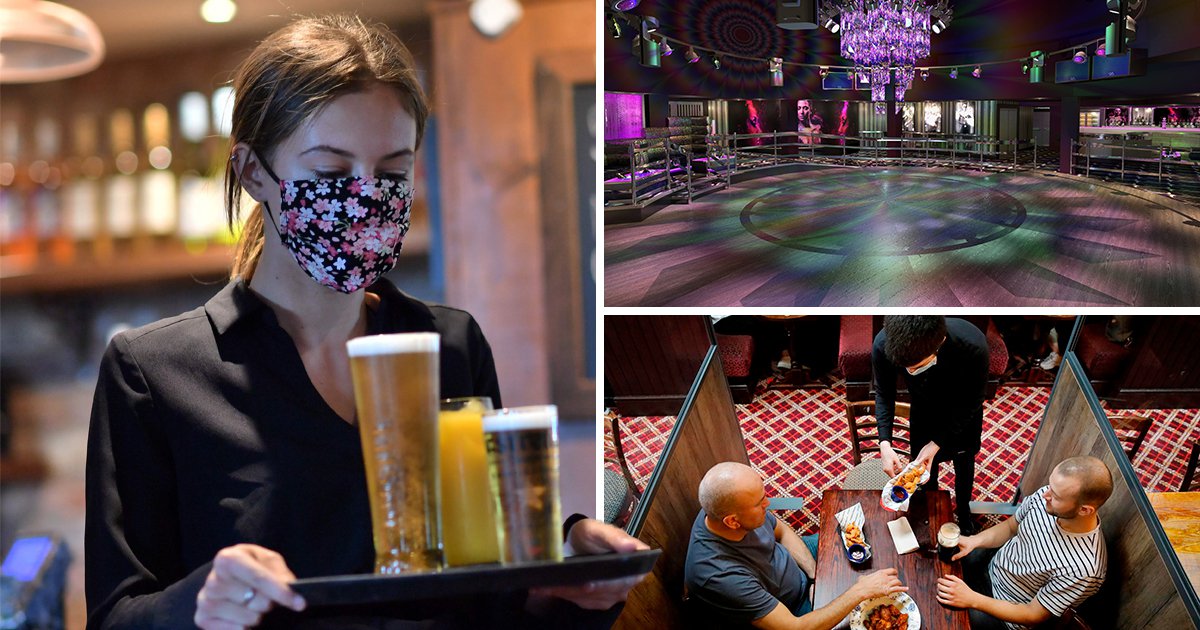 The delay to Freedom Day is estimated to cost the hospitality sector £3bn in lost sales and put 300,000 jobs at risk.

Business leaders have called on the Treasury to extend financial support measures, calling plans to stall the final lifting of lockdown restrictions by one month a ‘hammer blow’ to Covid-hit firms.

Dreams of a return to normality on June 21st came crashing down on Monday as the prime minister warned more time is needed to tackle rising infection rates, driven by the Delta Covid variant, first identified in India.

Firms such as pubs and restaurants will still have to operate at limited capacity and others such as nightclubs will have to stay shut until at least July 19.

However, the timetable for tapering off support measures such as the furlough scheme and business rates relief remains in place.

It means that from the start of July, businesses forced to remain closed will have to start contributing to furlough payments.

Employers who currently receive subsidies to pay for 80% of furloughed workers’ wages will instead get 70% and have to make up the extra 10% themselves.

A moratorium on evictions for commercial tenants is also about to come to an end.

Meanwhile, the 100% business rates exemption for hospitality, leisure and retail firms will still be scaled back to a 67% discount from next month.

Kate Nicholls, chief executive of UK Hospitality, said that the sector had already lost more than £87bn in sales in the pandemic and that more support was needed.

‘Simply put, if the supports provided by the chancellor are not sustained and adjusted, businesses will fail and getting this far will count for nought,’ she said.

UK Hospitality said the delay to Freedom Day would cost the sector £3bn in lost sales and put at risk 300,000 jobs.

The British Beer and Pub Association (BBPA) said it would cost pubs £400m and create ‘real fears of a lost summer’ for the sector.

Other business leaders have also slammed the move.

Claire Walker, co-executive director of the British Chambers of Commerce (BCC), said: ‘This delay to the removal of restrictions will come as a hammer blow to those firms who must remain closed, and to those who continue to see their ability to trade severely restricted.

‘It would be extraordinary if we saw government retracting support to businesses now.’

TUC general secretary Frances O’Grady called for targeted support for the worst-hit sectors, while Mike Cherry, national chair of the Federation of Small Businesses, said many small firms have been ‘hanging onto the edge’ and will be left wondering ‘if they can survive’.

‘Take a moment to remember that some small businesses, for example nightclubs, have remained closed throughout the entirety of the pandemic,’ he said.

Figures from the Office for National Statistics (ONS) today show the number of UK workers on payrolls rose by 197,000 between April and May but has fallen by 553,000 since the pandemic struck.

The Treasury said that it had already supported 11.5 million jobs through the furlough scheme at a cost of nearly £65bn and that the number of people on it was falling.

A spokesperson said the government ‘deliberately went long’ with the furlough scheme, pushing it out until September when it was last extended at the budget earlier this year.

But opposition MPs have slammed the decision not to extend support measures.

London mayor Sadiq Khan said it risked ‘dire consequences’ for businesses in sectors such as culture, nightlife and hospitality.

Greater Manchester Mayor Andy Burnham described the decision as ‘wrong’, tweeting: ‘If you are extending the restrictions, you should extend business support, particularly for those most affected. Simple as that.’

Labour have blamed the delay on Boris Johnson’s ‘incompetence and negligence’.

Shadow Home Secretary Nick Thomas-Symonds will dub the the Delta variant of covid ‘the Johnson variant’ in a speech on Tuesday about UK Covid borders policy.