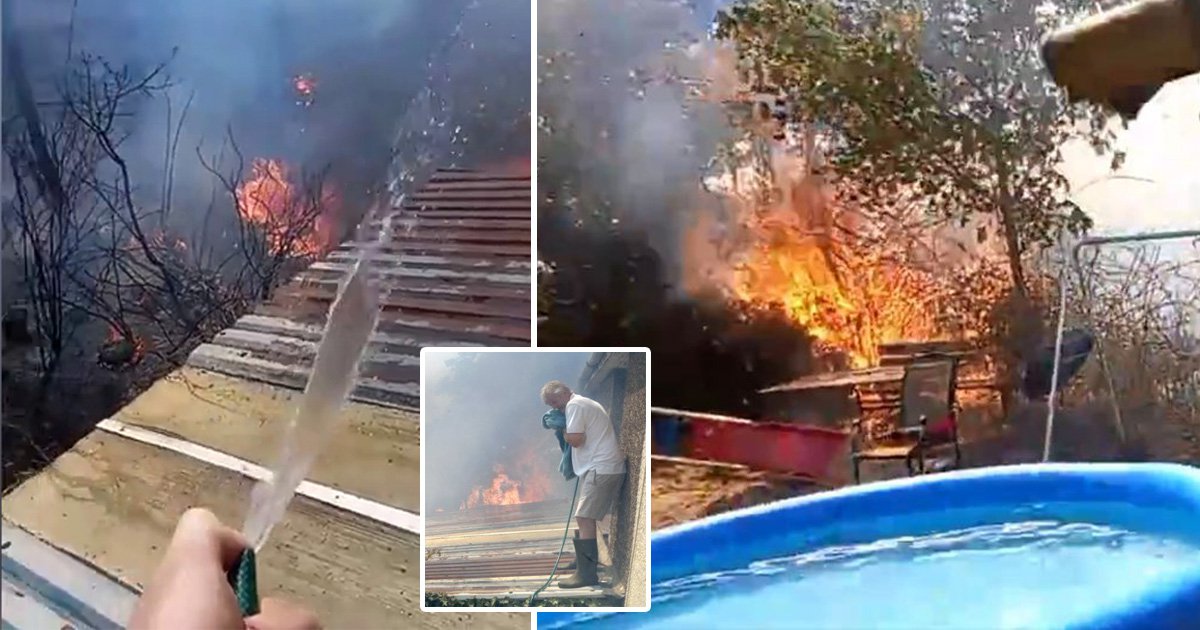 A homeowner has told how he tried to battle a ‘terrifying’ blaze in Wennington with a hosepipe two minutes after it first took hold.

Alfie Stock, 26, went onto the roof of his parents’ home to try and stop the fire spreading before realising the ground beneath him was burning.

Alfie told Metro.co.uk he has lost the home where he lived with his mum and dad due to the major blaze that has torn through the village.

Around 100 firefighters and 15 engines have been tackling the fire this afternoon, on a day when the UK recorded a record temperature of 40.3C.

Alfie said: ‘It was a neighbour’s compost heap, our houses back onto the marshes and it’s been like a tinderbox all week. It was a three-foot high pile of grass and the heat had built up inside, it just spontaneously combusted.

‘Within minutes it had spread. It was only a small fire and when the wind picked up it spread the embers right across the garden, they had conifers and all sorts of trees and it just spread from there.

‘The neighbour’s house was gone, there was nothing that could be done. By the time we phoned the fire brigade they were busy fighting another fire so they were out, they took a fair while to turn up.

‘Then when they did there was no water pressure because the water was being used elsewhere, so the first houses, my mum’s house and the neighbour’s, they were gone.’

A number of fires were reported to have taken hold in the village, which is in the east London borough of Havering, near the border with Essex.

It is not clear how the major incident began, with separate reports that there was an explosion at a scrapyard with the fire then spreading to dry grassland before reaching homes. Alfie believes this might have been after the fire he tried to tackle began to spread.

The gardener told how he went up onto the linked roof of his semi-detached family home on a road called The Green with a hosepipe to try and stop the fire spreading.

The section he was standing on was on their side of the roof that joins to the neighbouring property.

Alfie said: ‘It was a pretty futile effort, but you have to try something.

‘It was terrifying, it went from being part of the grass on fire to what I was standing on being on fire. When the fire brigade came round and told me to get down there was thick, toxic smoke.

‘We managed to get everyone out and they got their most important possessions, including pets, so I don’t think anyone has been in too much danger. Our house has totally gone. It’s just a case of wait and see now, I don’t think anything else can be done.’

Alfie was unable to return home as the flames and smoke took hold while he was on the roof. He retreated to the local fire station initially and then joined other residents sheltering in the village church before joining his girlfriend at his brother’s home in nearby Ockendon.

In the caption to a video shared on Twitter, he said ‘First 2 minutes of the Wennington fire. Never seen a fire spread so quick.’

The fire appears to have gutted dozens of homes and scorched nearby fields at a time when around 10 serious fires are also raging in London.

‘It came out of nowhere, everyone is in a state of shock,’ Alfie said.

‘I can’t see through the smoke but from what I’ve seen on the news most of The Green has gone. It’s a lot of houses.’

The UK recorded a record temperature of 40.3C today, with the reading taken at Coningsby in Lincolnshire.

The London Fire Brigade has declared a major incident, with more than 350 firefighters working across the capital today.

Jonathan Smith, Assistant Commissioner for Fire Stations with London Fire Brigade, told Sky News that the situation in Wennington was being brought under control but remained ‘dynamic’ with the threat of reignition.

A long damping down process will need to take place.

There is as yet no official word on casualties.