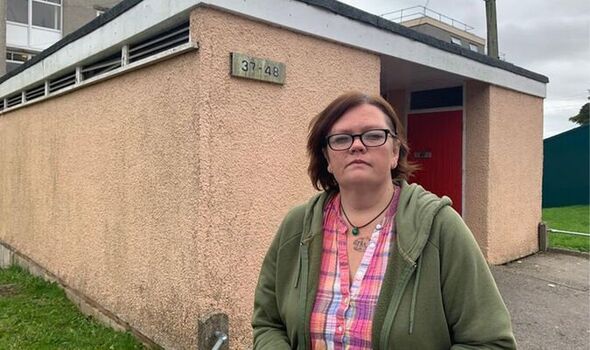 Back in 2018, Kirsty Nancholas moved into her dream home on the Barne Barton estate. Once one of the largest naval estates in England back in the 1960s, it became a little smaller and quieter, and Kirsty saw it as her forever home. Now, four years on and Kirsty still lives in her flat, along with her four-year-old daughter – but she says their home is closer to a nightmare than a dream.

Only six months after moving in, Kirsty was told that Talbot Gardens was due to be refurbished or even demolished, PlymouthLive reports.

Once a thriving neighbourhood, the area has been turned into an eerie estate – previously dubbed “Plymouth’s ghost town”. Kirsty’s daughter has no one to play with, leading to them drawing a hopscotch template on the ground outside.

A rodent infestation broke out, forcing Kirsty to hire a private contractor to tackle the problem, and there is damp and water damage in the flat itself. She claims there have been regular problems with housing company Sanctuary.

However, worse than all these issues is the fact that Kirsty just doesn’t feel safe in her neighbourhood anymore. She says: “It’s been horrible. I’ve had a lot of stress, depression and there’s nobody to talk to here. It really is horrible. At times it’s too quiet and I feel very unsafe. We have to make sure the main doors are locked. The one downstairs is never locked and I can’t lock it with my key.”

Sounding defeated, Kirsty says: “There just isn’t a lot we can do.

“We’ve had rodent problems and all they’ve done [Sanctuary] is put little black boxes by the door for the entire block. I had to pay out £100 to get my own guy to sort it. I have terrible water damage in my bedroom from the flat above, which has taken nearly three years to get fixed – it still hasn’t been fixed.

“The damp really isn’t good for my daughter’s asthma so I make sure I keep her out of that room.”

Social housing provider Sanctuary says a £35million regeneration of the site will “completely transform the area into a modernised, thriving estate.” Work began in 2018 and has seen two blocks demolished with eight more set to follow.

Once complete, the 10 blocks of maisonettes will be replaced with 106 new apartments, 12 houses, and a 60-bed care home. A spokesperson for Sanctuary said: “We are proud to be leading this much-needed multi-million-pound regeneration project as it will bring huge benefits to the local community.”

It sounds idyllic but the current reality is very different. Even Kirsty’s attempt to provide a hopscotch game for her daughter turned sinister. Shortly after it was drawn a group of teenagers appeared to be playing on it, but then they attempted to break into her flat, she claims.

“We get a lot of teenagers around of an evening. I drew a hopscotch outside because my kid doesn’t have anyone to play with because it’s only me and her,” explained Kirsty. “But the other day we had teenagers out there playing on it but then they tried to break into the building and the sheds. They were trying to get the post and things. We just can’t win.”

By the end of this week, all eight families who remain should be moved into one of two blocks, one of which is Kirsty’s. She says she can’t wait, mainly down to the safety aspect, but also because over time the eight remaining families have built up a strong bond.

It might have been dubbed a ghost town but Kirsty says it’s only the existence of a small number of neighbours which have left her able to live in the area. She admits: “Without the other families here I wouldn’t be here. We’re a lot closer together. We all stick together, we’ve got to.”

It is clear that the residents who still live in Talbot Gardens just miss how their neighbourhood once was. Kirsty believes in the end the demolition will bring positives but questions whether or not it needed to happen in the first place.

“It was fine, it was lovely before. Everybody spoke to everybody, kids everywhere and everyone was happy to talk which was very welcoming. For this to work, Sanctuary needs to communicate better.”

While speaking to Kirsty a fire safety inspector pulled over and said he was there to inspect the blocks. He appeared surprised that there were still families living there. Kirsty’s blunt response to him was: “We still exist”.

Chatting with various people still living here it becomes clear how ill-fitting the term “ghost town” is. This estate is nothing of the sort.

There are families here who are desperate to thrive and desperate for their state of limbo to end. However, despite only eight of them remaining they’ve still managed to struggle on and form a community out of what is left.

Initially, residents of all the flats on Talbot Gardens were asked to vote on refurbishment or demolition. Kirsty says she voted for refurbishment. She said: “I chose to refurb because we thought this was going to be our forever home. But the decision moved to it being knocked down.”

Despite work on the regeneration beginning in 2018, Kirsty claims she is still yet to receive an offer. She told me that she now thinks she must be “the only one left who hasn’t received an offer yet”.

Although Kirsty says no offer has arrived she at least knows where she’ll be moving to, and admits it will be an upgrade. She’s been told she’ll be in her new home in 18 months.

There are problems, however, Firstly, she says not one of the residents left believes Sanctuary’s time estimate. She said: “This is going to be the last block to be knocked down so we’re not going anywhere. The block that we want when they rebuild is the last one to be built too.

“We think it will be at least another seven years, at least.” Secondly, when she was initially informed of the plans to demolish her block she was told she would still own the new flat.

However, she says that that decision has now been changed and she is now going to be a part owner. She said: “It isn’t ideal because we were told that we would own all of it. This was supposed to be my daughter’s inheritance.”

Referring to Kirsty’s dismay at not receiving an offer, the Sanctuary spokesperson said: “We have offered to arrange independent property valuations for all the affected homeowners and more than 90% have so far accepted the resulting offer we have made for their home.”

Sanctuary’s full statement reads: “We are proud to be leading this much-needed multi-million-pound regeneration project as it will bring huge benefits to the local community, but do understand the development means significant change for residents who have lived in the area for a long time.

“We have offered to arrange independent property valuations for all the affected homeowners and more than 90% have so far accepted the resulting offer we have made for their home. While exchanging an old flat for a brand new one has not been an option for homeowners, they could consider using money from the sale of their current property for the equivalent percentage ownership share of one of the newly built homes.

“We remain committed to carrying out any general repairs that are reported to us and ensuring all the vacant properties on the site are secure as work progresses on this exciting project.”