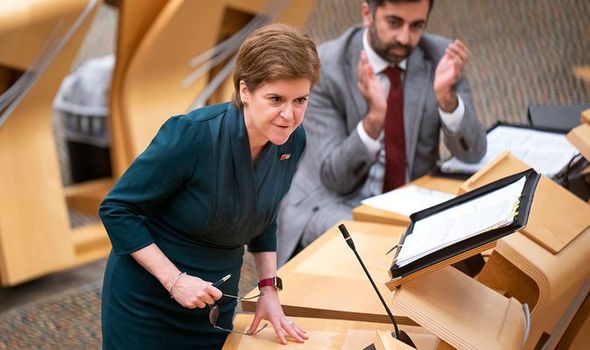 Opponents in Holyrood branded the party “detached from reality” and “hellbent” on pushing a “reckless economic policy”. Members of the nationalist party are due to discuss a proposal to draft a bill for the establishment of a new institution known as the “Scottish Central Bank” at the upcoming party conference.

The Scottish Daily Express has learned that it would function as a national bank for an independent Scotland.

Under proposals set to be debated, the new bank would have the authority to establish and issue a Scottish currency.

It would also be able to set interest rates for lending.

The motion, seen by the Scottish Express, states: “In anticipation of a vote for independence an enabling Bill for the establishment of a Scottish Central Bank will now be drafted.”

A supporting motion for the statement adds: “This enabling motion frames the Parliamentary Act needed to set up the central bank, which could be introduced immediately after a vote for independence.

“The Act will require that the central bank, as a public authority, will be owned by the State.

“The bank is the source of the currency and as such does not require any capital.”

Support for Scottish independence has waned in 2021, with the latest poll putting a ‘no’ vote at 48 percent to a ‘yes’ vote of 45 percent.

However, despite a lack of public support, in September, Scottish First Minister Nicola Sturgeon said at her party’s conference that she would push for a second independence referendum by 2023.

Prime Minister Boris Johnson has so far refused to grant a second referendum on independence, citing former SNP leader Alex Salmond’s 2014 remarks that the vote was “once in a generation”.

At last year’s SNP conference, the party voted to replace the pound with a separate Scottish currency “as soon as practicable” after independence.

It marked a major change in policy since 2014, when Mr Salmond insisted Scotland would continue to use the pound.

“Their own party’s growth commission commits them to brutal public spending cuts in the event of independence.

“Rather than waste parliamentary time in piling hypothetical on top of hypothetical they should put some effort into getting the sluggish Scottish economy moving after a decade in which we have fallen further behind the rest of the UK.”

Meanwhile Donald Cameron MSP, Scottish Tories’ Constitution spokesperson, added: “Instead of focusing on our recovery, the SNP are hellbent on pushing this reckless economic policy forward as quickly as possible.

“With jobs and livelihoods under threat due to Covid, this is simply not the time to be preparing a bill for a Scottish Central Bank.”

Pamela Nash, chief executive of Scotland in Union, said: “The SNP’s plan to scrap the pound would be devastating for Scottish businesses and residents, threatening mortgages, pensions and wages.

“The strength of the pound and the Bank of England’s international track record in the markets helped us through the Covid crisis and will continue to help with the recovery of public services.

“Political parties should be exploring how we can work together to address issues such as the climate emergency, not obsessing about how to pull communities apart.

“Rather than put our NHS and people’s jobs at risk by creating a new central bank and a new currency, we are stronger together as part of the UK.

“They are prepared to risk our recovery from the pandemic by calling on MSPs to spend time discussing economic plans that would be simply unworkable in practice.”

Andrew Wilson, who served as chairman of the SNP’s 2016 Growth Commission, has warned that adopting a separate Scottish currency could severely hit residents’ incomes and pensions, as it would swiftly devalue after being introduced.

A recent poll conducted by Onward showed Scottish voters wanted clarity from the nationalists on the status of the pound in an independent Scotland before a second referendum.