The wicked couple persuaded the little girl to pose for a picture with them as they walked their dogs near their home in Hattersley, Cheshire. 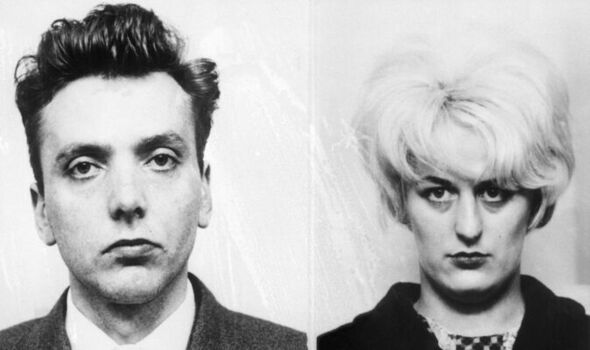 Just hours later, on the evening of October 6, 1965, they lured 17-year-old Edward Evans back to the house where he was murdered with a hatchet.

He was the last to die at the hands of the pair but Brady’s secret prison files reveal they may have already been targeting their next victim.

According to the jail dossier, for years Brady had been carrying around the picture of him and Myra with the girl.

No one seems to have known he even had it until he showed it to an astonished warder – claiming he had only taken the snap to use up a roll of film.

The picture was one of a number of undisclosed photographs, taken in the couple’s last days of freedom, with which Brady was said to be “obsessed”, according to the prison reports.

Many of the snaps were left with Hindley’s mother and Brady even threatened to take legal action to get his hands on them.

The first prison staff knew about the picture was in May 1972, six years after he was sentenced. He showed it to a guard while chatting about Hindley’s brother in law, David Smith. By this time he was in Parkhurst Prison, on the Isle of Wight, having served the first part of his sentence in Durham.

The officer reported: “He went on to show me the photograph he had of Myra, a younger girl and two dogs. He said it was taken the previous day to them being arrested.

“He’d been out walking with the dogs, had one or two snaps left, so decided to use them up. The young girl was the next-door neighbour’s child.

“He said it was 10 o’clock that night that everything broke and blew up and they were arrested the next day. I presume this was the time when the last victim was killed, the boy found in their home.”

He added: “It is apparent the only person he has any feeling about, at all, is Myra.”

Guards said that Brady had been complaining about “police bloody mindedness” for failing to obtain other pictures, taken that day, from Hindley’s mother. They included some that he had already organised into a slide show using a projector.

Brady said he would take legal action through his solicitors if Hindley’s mother continued to refuse to return the snaps. “He seems to be obsessed with these photos,” the jail report remarked.

The secret reports on Brady, compiled between 1968 and 1986, went into his probation file and were supposed to remain sealed for 82 years.

Although 138 pages will remain closed until January 2069, the rest were declassified in April 2019 and placed in the National Archives.

Serial killer researcher Dr Tom Clark, of Sheffield University, has been analysing the files which still contain many unpublished details of Brady’s 51 years in captivity.

He said: “Most of the information comes from prison logs – conversations between prisoners and prison officers which were then put on file so they could see how the prisoner was doing.

“The files show he is as close as you get to evil. Even among all these dangerous men he was a monster of monsters.”