Personal Independence Payment: Advice on how to claim

Shirley Sullivan, 48, receives the support to help with living costs but had to fork out £50 when she found her new home was covered “in brown and nicotine stains” last week. Shirley requested to move into a bungalow having previously lived in a two-bedroom house, which was not suitable due to her disabilities.

Speaking to Nottinghamshire Live, Shirley said: “I have been sleeping on a sofa for three and a half years because I could not get up and down the stairs.

“It was not right for me to be there.”

Shirley lives with severe pain due to a bulging disc in her back and osteoarthritis. She also suffers from mental health issues including post-traumatic stress disorder (PTSD), depression and anxiety.

The mum went to visit her new property from Nottingham City Homes on June 22. However, she said she was left “shocked and disgusted” by what she saw at the bungalow in the Basford area of the city. 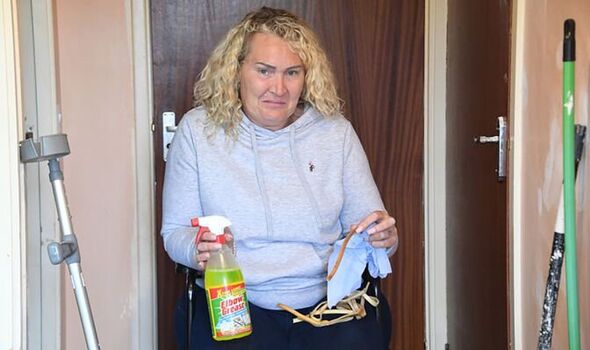 “There is smoke damage from the previous tenant everywhere”, she added. “There was brown everywhere – it is very filthy,” Shirley continued.

“I am disabled and I am on PIP to help me to do my day to day things. But I have spent that money on cleaning and decorating because it was that bad.

“I spent up to £50 on cleaning products. You can smell it even in the loft – it is horrendous.

“I receive the maximum pay on PIP because I do struggle. I do not like leaving the house.

“I do not ever leave the house, and it is mainly a young lady that does the shopping for me because my daughter is at work and she cannot do it. I have to pay her as well.”

Shirley is now living with her partner until her Nottingham bungalow is cleaned up.

“I need to get my home sorted out but it has just been a nightmare. I think it is unfair and disgusting because a new property should be in good condition.

“I have got photographic evidence of the state of that bungalow and how I found it. I want to be given all that money back because I spent the money that was supposed to help me on cleaning products.”

A spokesperson for Nottingham City Homes said: “Ms Sullivan contacted us at the end of June about the condition of the property she had just moved into. We investigated the issues she raised and wrote to her in early July, outlining the steps we would take to rectify them.

“We are in the process of completing the remedial works, including replacement of window seals that are nicotine-stained because of the former tenant, who was a heavy smoker, and we spoke to Ms Sullivan this morning to arrange for these works to be carried out.”