The Duke of Sussex was blasted as a “figurehead for colonialism” who has “no record of commitment to the kinds of ideas that Mandela stood for” after he delivered a speech to mark Nelson Mandela International Day, held annually on the former South African president’s birthday. Harry, who was joined by his wife Meghan Markle, also spoke about his mother Princess Diana’s meeting with the former South African leader in March 1997, and how he “sought solace” in Africa following her death.

But his personal account did not go far enough, with critics in the US saying his speech “relied heavily on clichés about bravery”. 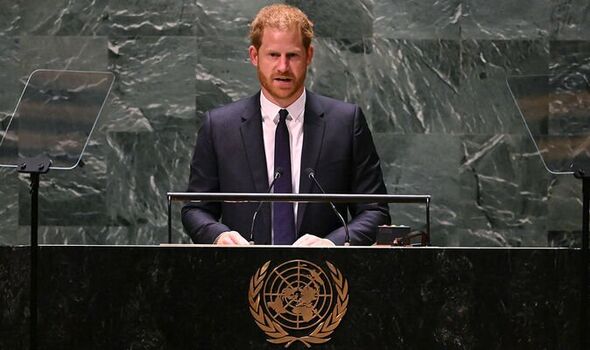 He said: “The British royal offered an insipid, cliché-laden take that only further watered down the anti-apartheid icon’s story.”

Mr Aleem also questioned why the royal, who quit the Royal Family in 2020, was invited to speak in the first place.

The US journalist said: “As a member of the British royal family, he’s a figurehead of colonialism and has no record of commitment to the kinds of ideas that Mandela stood for.

“Unsurprisingly, Harry’s remarks were an anodyne homage that avoided reckoning with the historical figure’s political goals and strategic decisions, and instead relied heavily on clichés about bravery.”

He added: “Harry is a fratty member of the British Royal family who in earlier years used racial slurs, dressed up as a Nazi at a costume party and boasted about killing Afghans well after the war in Afghanistan became a neocolonial nation-building project.

“One would not expect him to be able to appraise Mandela’s legacy in a sophisticated manner, nor confess to the origins of the white supremacy that reigned in South Africa.”

Harry spoke about a 1997 photo taken in Capetown of Mandela and his late mother Diana, Princess of Wales, which he said hangs on his wall.

Speaking about his beloved mother, he said: “On my wall, and in my heart every day, is an image of my mother and Mandela meeting in Cape Town in 1997.

“The photo was presented to me by the late Archbishop Desmond Tutu, whose friendship and inspiration were their own treasured gift. My wife and I had the honour of introducing our four-month-old son to him back in 2019.

“A man who had endured the very worst of humanity – vicious racism and state-sponsored brutality. A man who had lost 27 years with his children and family that he would never get back.”

But Mr Aleem hit back saying Harry “said virtually nothing of Mandela’s upbringing, his different political phases, his management of the immensely complex demands of integrating South Africa into a multiracial democracy in the 1990s or the lessons he learned as he evolved from protester to powerful politician”.

He added: “It’s also not too surprising that Harry — still sixth in line to the throne of a royal institution that once oversaw the biggest empire in global history — did not discuss the role of colonialism in creating the horrific injustices Mandela and his countrymen endured.”

The duke has also been criticised for wading into US politics once again since his speech on Monday.

In the UN General Assembly hall, Harry spoke about the threats from Russia’s invasion of Ukraine, what he called the reversal of constitutional rights in the United States and the “weaponising” of lies and disinformation.

He added: “We are witnessing a global assault on democracy and freedom – the cause of Mandela’s life.”