This is the haunting moment British deep-sea divers discovered the splintered lost wreck of a US Navy destroyer sunk by enemy fire in the First World War.

The shattered vessel has been lying marooned in the depths since it was struck in 1917 by a German submarine missile – killing 66 of its 110-strong crew.

Armed with eight 21-inch torpedo tubes and four four-inch guns, the steam turbine-powered Jacob Jones rescued hundreds of stricken sailors from torpedo attacks on its patrols of British waters from May 1917 until it met the same fate seven months later on December 6.

It was hit three feet below the water line 60 miles off the coast of England, with historians saying the hulking 315ft ‘war workhorse’ sank in only eight minutes.

The 44 sailors who survived used onboard emergency rafts – with the strike so horrific the German U-boat commander who hit them took two maimed British sailboards onto his submarine and radioed the allies coordinates so the rest could be rescued.

Due to the speed the hulking warship plunged into the depths it was feared it was too shattered to find and its location remained a mystery until now.

The divers who made the discovery on Friday 40 miles off the coast of the Isles of Scilly, said no human remains were found, and added it had been top of a ‘wish list’ of ship hunters for decades.

Expedition diver Dominic Robinson, 52, said: ‘This is such an exciting find – Jacob Jones was the first ship of its kind to be lost to enemy action. 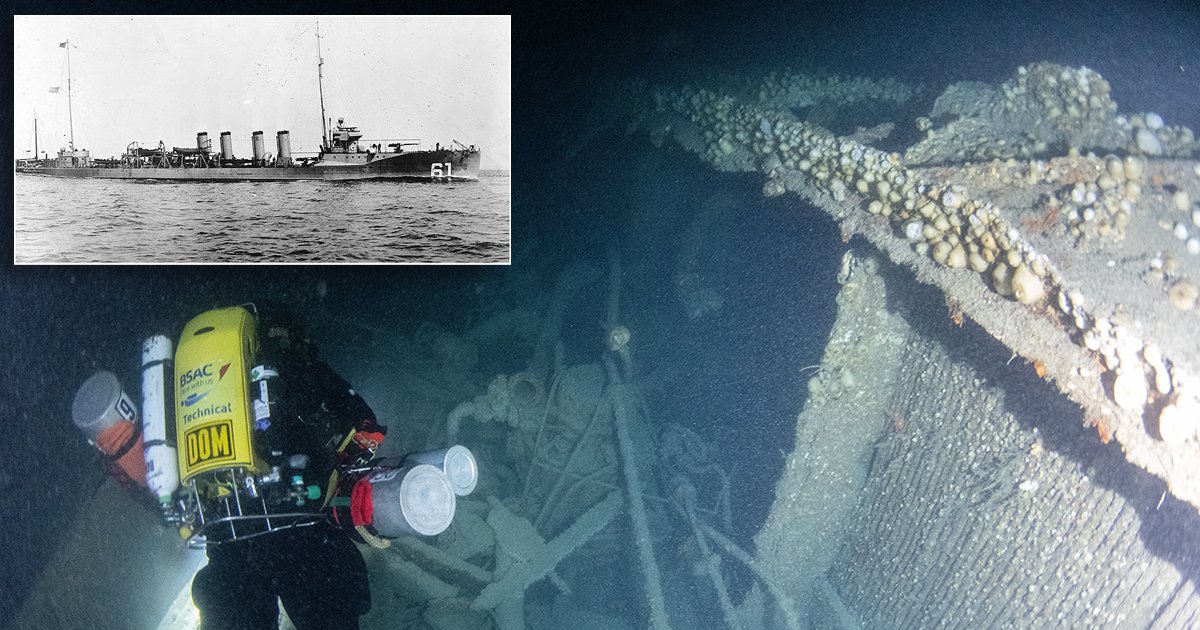 ‘No human remains were found or personal artefacts. But for me, the thing that brought it home was the bent prop shaft – which shows the trauma the vessel must have been through when it was torpedoed. Absolutely incredible.

‘The ship, lost for over 100 years, has been on a lot of people’s wish lists because of its historical weight.’

The diver, from Plymouth, Devon, added about the carnage after the ship was torpedoed: ‘The destroyer’s commander ordered all life rafts and boats launched, but as the ship was sinking the armed depth charges began to explode – which is what killed most of the men who had been unable to escape the ship initially.

‘A few of the crew and officers also tried to get men out of the water and into the life rafts.

‘One name in particular was Stanton F Kalk, who spent his time swimming between the rafts in the freezing Atlantic water.

‘But he ended up dying of cold and exhaustion – he was awarded the Navy’s Distinguished Service Medal for his heroic actions that day.

‘The German submarine commander, Captain Hans Rose, showed an incredible act of kindness. He actually saw all the Jacob Jones men in the water and took two badly injured crewmen aboard his own submarine.

‘He then radioed his enemies at the US base in Queenstown with their coordinates to come and rescue the survivors.’

Darkstar trawled GPS locations provided by the UK hydrographic office to make the find, and located it after their second day of searching.

Jacob Jones was one of six vessels named Tucker-class destroyers, designed by and built for the US Navy before the nation entered war.

Hailed as one of WWI’s main workhorses, it rescued hundreds of survivors from torpedoed ships.

By the end of the war in November 1918, it is believed Germany was responsible for sinking more than 5,000 merchant ships and around 100 warships.