Parents-to-be can spend months searching for the perfect baby name. Some run their shortlist past friends and family, while others keep it secret for fear of their unusual choice becoming popular. What people think seems to matter – so do we judge people by their names?

Before filling in their birth certificate, parents want to know what first impression they are creating for their child. They want to know what their teacher or potential employer might think but not say, says Mumsnet founder Justine Roberts.

Baby names discussion pages on the parenting website have risen in popularity from five and a half million views in 2015 to seven million this year.

“More than anything else, people want to know what the crowd thinks about a particular name that they’re not quite sure about,” says Ms Roberts.

The stories behind your names

“We can all think of names which conjure up in our minds a hairdresser, an aristocrat or a criminal,” says the senior lecturer at Birmingham City University.

“These stereotypes are passed on from our parents or associatively learned.

“If you have a negative experience of someone you will associate the characteristics of that person with the name and project them onto someone with the same name.”

This happens with celebrities who make the front pages for the wrong reasons and even fictional characters from television shows, she says. 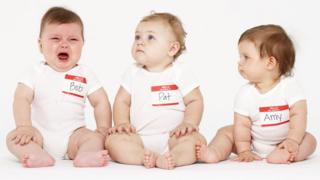 Author Sharon Bolton says she published books using only her initials after “suffering the stigma” of sharing a name with a character from BBC sitcom Birds of a Feather.

“The name Sharon became synonymous with background, character and lifestyle. To this day it conjures up images of Pauline Quirke slouching around Chigwell in a shell-suit,” she wrote in the New Statesman.

Meanwhile, BBC Europe Correspondent Kevin Connolly wrote that his first name “more or less predestines you to being considered an idiot”.

During the 1960s both Kevin and Sharon were in the top 15 of baby names registered but this year they did not make the top 100.

Names becoming “too popular” and your child being one of many in their class is one of the top concerns among Mumsnet members, says Ms Roberts.

“Previously people would choose a ‘good solid name’ that had the approval of many because many other people had chosen it,” according to linguist Professor Richard Coates.

“But the social effect has been that the name has become a bit common and the assumption is the person will be common.

“Nowadays people have a desire for their child to be called something different or unique,” he says.

Lalage Bown is an emeritus professor of adult and continuing education at the University of Glasgow, who says she has been judged on her unusual first name.

“A female professor is still these days not very well heard of and when people see or hear the name Professor Lalage they automatically think it’s a man,” she says.

“Once in Nigeria I was held off a plane because they said the passport was in the name of my husband.”

But she says having an unusual name has had its advantages.

“When I was about six or seven we were staying for a holiday in Hayling Island in Hampshire and I made friends with a boy.

“About 40 years later I was working in Glasgow and my name was on my office door.

“This man who was passing by for a conference said to my secretary ‘I know that name, it’s someone I saw when I was seven years old’ and we had a catch up.”

Mrs Bown says her name is classical Greek meaning “chatterbox” but that her father had told her it meant a “sweet talker”.

“I thought it would be interesting to become someone who was a good speaker,” she says. “So I began practising public speaking about gender equality in parliament on a soap box in Hyde Park.”

Parents are aware of the notion that the name we give our children could have a bearing on what they grow up to become, says Ms Roberts.

The advice she gives is: “Consider whether the name would still work if the child in question became a high court judge.”

A name is a powerful label, according to Ms Boag, as “it guides how people treat us and in turn how we behave.”

“But we can reject that stereotype. New parents who are choosing baby names can teach their children that everyone should be judged as individuals and not on their names.”