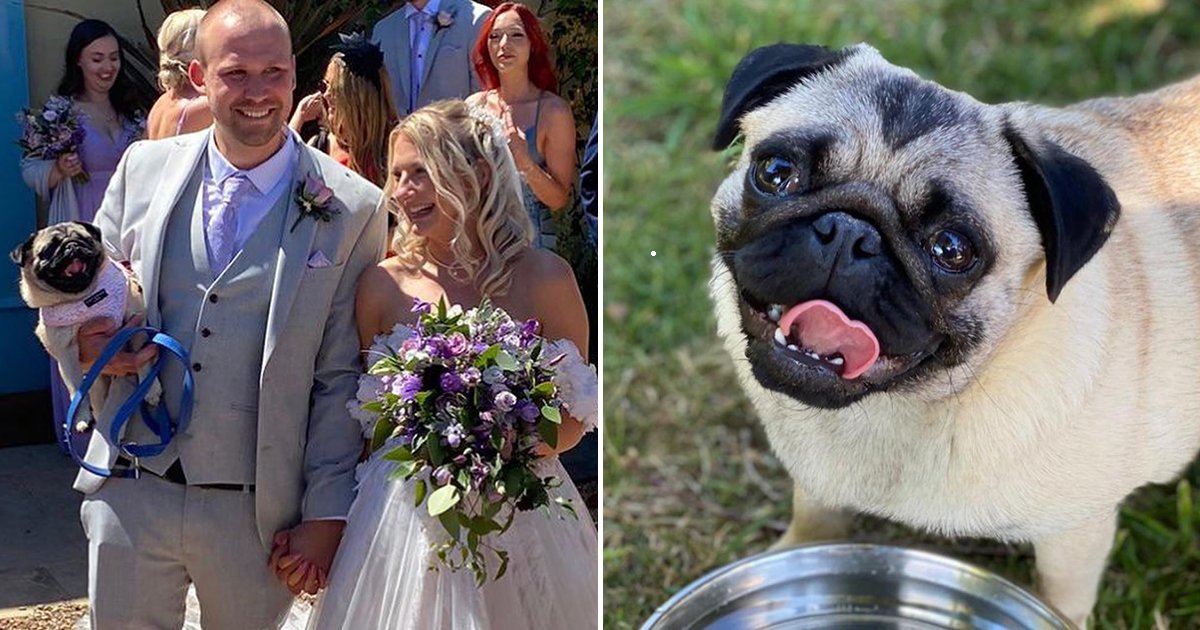 A newlywed couple said their perfect day was ruined after a kennel blunder meant their dog died just hours later.

Ffion James and Ben Hill got married on Friday at South Farm in Royston, where their beloved pug Luna joined them to pose for photos in their arms on one of the hottest days of the year so far.

They then left their dog in the care of kennel workers so she could be looked after while the husband and wife enjoyed the rest of the day.

But later that day, Luna was found dead after she was apparently forgotten about for two hours and left in the back of a roasting hot van.

Ffion, 30 and of Preston, Hertfordshire, said: ‘I’m absolutely devastated and still can’t bring myself to look at the photos.

‘To think my Luna was dying in the back of a van while we were celebrating is just too horrific to contemplate.’

Stunning pictures show the happy couple together with their pet at the South Farm wedding venue in Royston, just hours before tragedy struck.

Ffion and Ben are so upset they have cancelled their honeymoon to Bath, which they were supposed to be taking Luna with them on.

‘It was just so hot that it wasn’t fair on Luna so we asked for her to be collected by the kennels, to be brought back,’ Ffion added.

‘We woke to find out our beautiful little puggy had died shortly after these photos were taken.

‘They put her in a van, parked in their car park and then just forgot about her. Poor Luna died in what was basically an oven.’

The couple have now called for the kennels – Country Boarding for Cats and Dogs in Baldock – to be shut down.

The owners have apologised for what happened, but Ffion said that is ‘not good enough’.

‘The weather would have made the van unbearably hot, and I can’t imagine the suffering she must have gone through,’ she said.

‘Everyone who knows us knows that we adored our little Luna and we are completely traumatised that we have lost her too soon.

‘But also in such a horrific and unimaginable way. She was our baby, best friend and entire world.

‘We can’t believe she is gone and what should have been the best weekend of our lives is now ruined and a living nightmare.’

Renate Burrowes, who owns Country Boarding for Cats and Dogs alongside her husband Jeremy said: ‘On Friday, July 8, an incident happened in which a dog died in our care, which has devastated us all here at Country Boarding.

‘We care deeply for all the animals we look after and to have something like this happen has left us completely heartbroken.

‘We wanted to provide more details here so customers know exactly what happened and so you know what we’ve done to ensure something like this can never happen again.’

She explained when Jeremy brought Luna back to the kennels at 3pm, he was urgently called to fix a system issue which was affecting customers in reception.

‘This distracted Jeremy from notifying a staff member to come and collect the dog, as would be the normal procedure,’ she added.

Two hours later, Renate found Luna. She said: ‘I found she was unresponsive at that time despite trying, I could not revive her.

‘I cradled her and held her, and with the help of a member of staff laid her in a dog bed.

‘We were so heartbroken for this little dog and so wished for her to come alive again.

‘Those sorts of miracles seldom happen, and so my next thought concerned her owners.’

She said she immediately attempted to contact the couple, but the messages were not picked up until the next morning when Ffion and Ben went to collect her straight away.

‘Since then, we have been in contact with the owners about the next steps, which is a private matter and whilst we know we can’t bring Luna back, we will work with them to ensure we help and support them in any way we can,’ Renate added.

‘Whilst it sounds an unimaginable mistake to make, humans make mistakes and all we can do now is learn from this incident.

‘The blame for this incident lies entirely with us, as the business owners and not with our wonderful employees.’