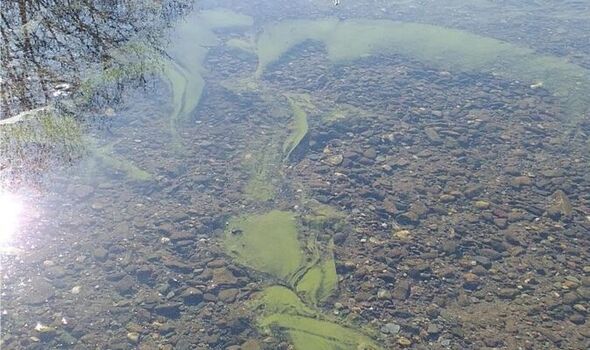 Loch Lomond & The Trossachs National Park have issued a warning over the toxic phenomenon. They urge people visiting the area to stay out of the water, as well as to keep their beloved pets and livestock out of the water. The dangerous blooms were spotted in Milarrochy Bay, at the east side of the lake, north of Glasgow.

Toxins produced by the algae can kill dogs and other animals.

At skin contact, the algae can cause a rush to humans and illnesses if swallowed.

The algae are produced by the heat, as a result of the warm temperatures the country is seeing these days.

The blooms appear green, blue-green, or greenish-brown at the surface of the water.

It can also release musty, earthy or grassy odours, and cause foaming on the shoreline.

The National Park said that it is yet unknown how long this phenomenon will last, explaining that algae blooms can form on the water and dissipate again within hours or days, depending on the weather and the water temperature.

A warning announcement explained: “The blooms normally form in warm still water, so they can form on a still morning around sheltered shore areas, but then get broken up by rain or waves if the wind picks up.”

And the National Parks added: “Due to this changeful nature of blue-green algae blooms we recommend people err on the side of caution if they know there has been a warning in recent days.”

The dangerous phenomenon was also reported to the Scottish Environment Protection Agency.

Warning signs will also be placed by the authorities on the shorelines, to protect people from the toxic algae.

The National Park called people to be alerted of the incident and watch for any warning signs.

If they don’t see any signs, visitors are asked to inform the environmental health team at a local authority, or SEPA directly.

It includes picturesque villages and mesmerising scenery and hosts a rich local history and amazing wildlife.

It is estimated that 50 percent of Scotland’s population lives within an hour’s drive of the Loch Lomond and the Trossachs National Park.