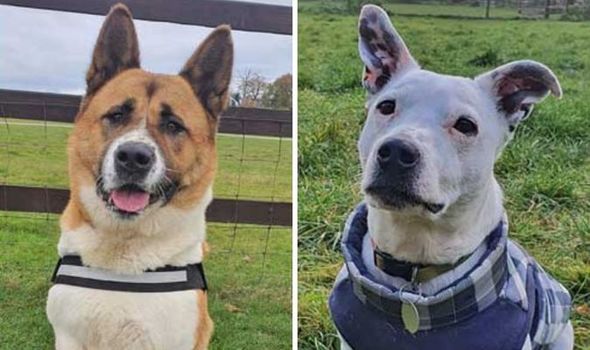 Hillside Animal Sanctuary and Dog Rescue in Norfolk shared a post on Facebook last Thursday calling for people to donate old bedding to keep their dogs warm in the winter. Founder Wendy Valentine said the centre was inundated with duvets in response to their appeal.

Ms Valentine described the “traffic jam” of cars caused as people were “queueing out the door” to donate spare bedding.

She said: “We’ve usually got a good stock of donated bedding but recently we’ve had so much rain.

“The dogs go out and we use towels to dry them off (but) there’s only so much you can do and we have to change the bedding more often.

“We just ran very low and advertised on Facebook and in the local paper and we’ve had people queueing up outside with donated bedding.”

Hillside’s post on Facebook, which has racked up around 900 shares, read: “We have become in urgent need of old bedding.

“If you live locally and have any old or spare (non-feather) duvets or blankets, our dogs would be so grateful for them to snuggle up into during the winter.

“We usually have a plentiful supply of donated bedding but just recently we have been using more and our stocks have dwindled.”

Ms Valentine estimates around 100 people responded to the appeal to bring duvets for the dogs at their Frettenham and West Runton sanctuaries.

She said: “John, who works with me, he looked at the CCTV camera and you could see people queueing outside the door.

“At one point we had a traffic jam outside from people bringing the bedding.”

Ms Valentine added that the generosity of local people will make a big difference to the rescue dogs in the freezing weather.

She said: “They’ve got their plastic beds… but put the (duvets) on and it just makes them cosy and comfy and warm.

“It’s just nice and cuddly for them.”