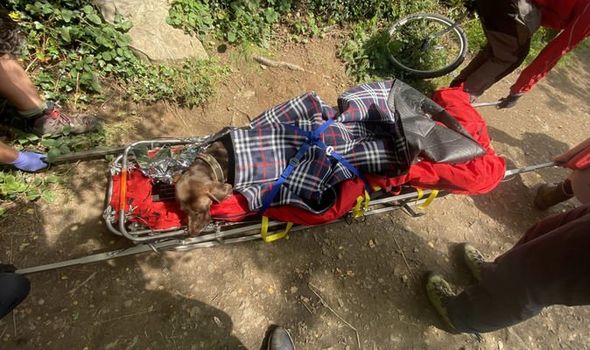 Alfie, an eight-year-old German shorthaired pointer, and his owner Daniel Wright, 43, his wife Jade, 44, and oldest daughter Isabelle, 13, were walking the Four Waterfalls trail in the Brecon Beacons last Tuesday.

After about an hour-and-a-half, Alfie escaped his lead and wandered over to some bushes, which hid the steep drop at the edge of a cliff.

Mr Wright looked on in horror as Alfie plummeted off the ledge, smacking onto the rocks below.

He said: “As Alfie slipped he sort of fell through the bushes, he yelped as he fell, then I heard the people below gasping in horror and screaming. I also heard the noise of him landing on a hard surface.”

Mr Wright, from Milton Keynes, said he “thought the worst” when he looked down and saw his dog shaking violently and yelping in pain.

Along with fellow walkers, he scrambled to reach Alfie and Dyfed-Powys police were called who in turn alerted Central Beacons Mountain Rescue.

Alfie was taken away on a stretcher and driven to a vet in Merthyr Tydfil for an X-ray and surgery.

Alfie suffered a fractured elbow and pelvis and needed a metal plate fitted in a £6,000 operation.

But just two days later, Alfie was discharged and went home to recover.

Mr Wright said: “He is very much back to his old self and is already showing signs of frustration at not being able to go out.

DON’T MISS
Tourist says seaside town should be on banned list as it’s so busy[UK]
WHO Covid update LIVE: Major announcement after terrifying new alert[WORLD]
Kate Garraway says ‘I have failed my children’[TV]

“So many people offered their help both on the way up and while we were waiting for the rescue team, it really is something that restores your faith in human nature.

“He means everything to us, he is a member of our family, not a pet. To have lost him in these circumstances would have been very difficult to get over.”