Donald Trump has shared a bizarre video portraying himself as a ‘superhero’ as he teased a ‘major announcement’.

In just another day for the former US president, Trump posted a brief video on his social media platform Truth Social yesterday.

And he had a simple message for his followers: ‘AMERICA NEEDS A SUPERHERO.’

Music blasts as the screen cut away to a cartoon of Trump posing like Superman outside Trump Tower in New York City.

He rips his dress shirt open to reveal a superhero outfit complete with a letter ‘T’ on his chest as beams of light shoot out of his eyes.

‘AMERICA NEEDS A SUPERHERO!” Trump said in a post. ‘I will be making a MAJOR ANNOUNCEMENT tomorrow. Thank you!’ 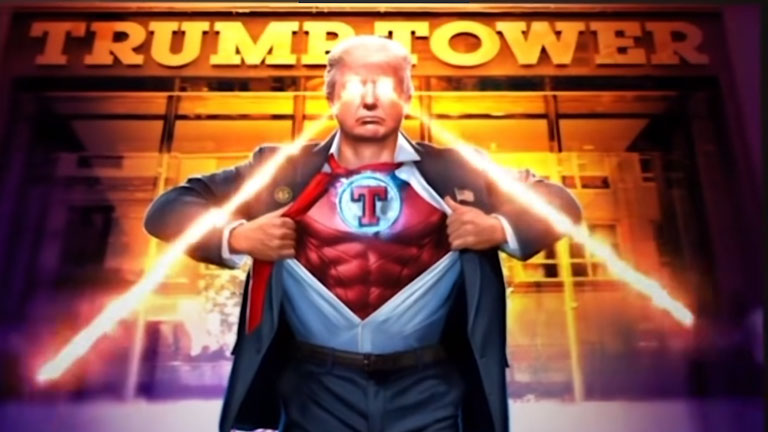 The post did not hint at what Trump is about to announce, however.

Exactly one month ago, Trump, whose presidency shook democracy, threw his hat into the presidential ring for a third time in a row to little media fanfare.

His unusually early announcement came as multiple state and federal investigations into his frantic attempts to cling to the White House led to the January 6 Capitol riots.

And voters haven’t been too interested either. Support for the media tycoon has waned, with a recent Wall Street Journal poll placing him behind Florida governor Ron DeSantis – 52% versus 38%.

Some 1,500 voters surveyed by the newspaper said they were likely to vote in the GOP primary in 2024.

Overall, around three in four Republican voters see Trump favourably, though those who see him as anything but have steadily risen.

This was seen during the nail-biting races for the senate and governor seats last months, where voters turned their backs on Trump’s hand-picked candidates.