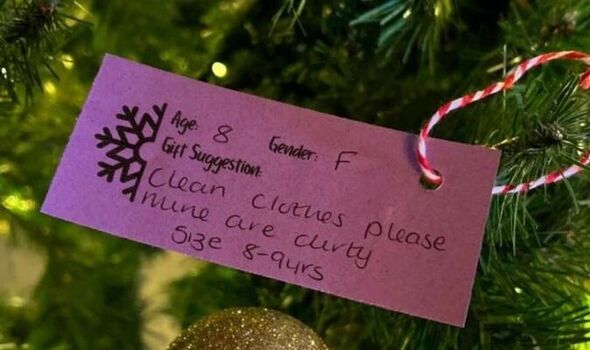 Staff at the Percy Arms in Chatton, Northumberland said they were left “shaken” after inviting downtrodden children to write letters to Santa Claus. The local kids didn’t ask for the expected video games and standard toys but their wishes were much more harrowing.

One child dreamt of “clean clothes” while another said he was used to getting “nothing” for Christmas.

As part of a regional Christmas initiative, pubgoers were invited to pick up the wishes written on tags hung on a Christmas tree and buy them a present.

A 15-year-old girl said: “A present for my dad. He’s sad since my mum died and not in a good place.”

While a six-year-old girl said she wanted: “Something to make with mammy.”

Another note, written on behalf of a 17-year-old boy, simply said: “Anything, as he’s used to getting nothing.”

The pub, part of The Inn Hospitality Group portfolio, teamed up with Bedlington-based community organisation Christmas For All.

The Inn Hospitality Group co-founder Oliver Bennet said the children’s requests “had shaken each and every one of us to the core.”

He added: “You can read about hardship and food banks and poverty.

“But to see, written down in black and white, young children asking simply for some clean clothes for Christmas – well, that really hits you.

“And many of them – despite having so little themselves – put others’ happiness before their own.

“That’s the real spirit of Christmas isn’t it – and it’s heartbreaking that it’s taking children to remind us of that.”

Christmas for All is looking for gifts for more than 2,000 underprivileged children in southeast Northumberland alone.

Some of the children have been referred to Christmas for All by other similar services, local authorities and the families themselves.

Prices rose by an eye-watering 11.1 percent in the year to October, the Office for National Statistics said, as inflation hit poorer families.

Energy costs are one of the biggest drivers of consumer prices, with the agency saying prices alone have leapt nearly 130 percnt higher over the past year.

Basics like eggs and dairy have risen in cost by 12.4 percent since last November.