Police Constables Jack Grainger, Jessica Hamblett, 29, and Richard Hayes, 42, have now landed national bravery awards for detaining Mohammed Shabaz Rafiq, who is now behind bars. The officers were advised to wait for armed back-up when Rafiq, 24, was spotted with a weapon in Harpurhey, Manchester, but they saw children on their way home from school, so the officers decided to act.

The Greater Manchester Police officers, who received their gongs at a ceremony last night, were in an unmarked patrol car on March 24 last year at 3.30pm when they noticed some men in a phone box known to be used by drug dealers, reports Manchester Evening News.

PC Hamblett said: “We were looking at them and then we heard a bang. I turned to my colleague and said ‘that’s a gunshot’. As I said that, a guy came running with a black bin bag, clutching it to his stomach. We pulled up alongside him. He’s realised we’re coppers and started running.”

The man ran towards a black Ford Focus carrying three other men and he desperately grabbed at the door handle, trying to get in. But the door was locked and in his desperation the man ripped the door handle from the door. He threw the bin bag through the open window of the car as it attempted to speed away.

While PC Grainger chased the man who had just abandoned the bag, PC Hayes used his baton to try and smash the now closed windows of the car as it mounted a kerb and attempted to manoeuvre by some parked cars, scraping the rear walls of the houses that back onto a residential road.

“It was like a comedy sketch. There were three lads in the car and they were panicking,” PC Hamblett, from Bury, Greater Manchester, continued. 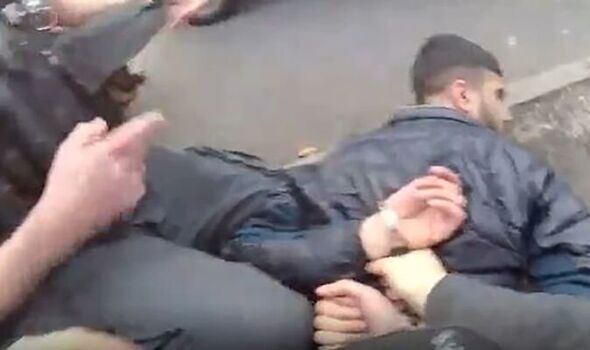 PCs Hayes and Hamblett drew their Taser stun guns and “red dotted” the men in the car but they continued their slow-motion getaway as the car scraped back walls of the houses as it attempted to manoeuvre by parked cars. They radioed for armed back-up but admit they over-rode a message to wait for that back-up.

PC Hayes said: “We couldn’t wait for armed resources to arrive. There were kids in the street. You have to react to that. That’s what you sign up for when you join the police.”

PC Hamblett added: “Honestly, I would do exactly the same again. He was that close to us. We were already in too deep. It’s ‘do you engage with it’ or let someone with a live firearm go towards school children. Some officers have said we were absolutely mad and that they wouldn’t have done it. But I think anybody in our position would do the same thing.”

PC Hayes, a father of two who has been with the force 17 years, said: “I knew straight away it was a handgun. I have firearms experience. We’ve got kids. We don’t have time to worry about it afterwards. You do get a bit of an adrenalin dump.”

PC Hamblett, who has been with the force for seven years, said a senior colleague arrived at the scene and took her to one side. She said: “My adrenaline was so high at that time. I didn’t even know where I was. I was in the middle of the road in a daze.”

The trio were on the tenth hour of a shift when the drama happened – a drama that meant they remained on duty for some time yet.

In the end, a gun was found in a black bin liner underneath the Ford Focus, not on the man who had fled. But none of the three officers knew where it was during the chase, only that they had heard a bang and were convinced there was a firearm somewhere. 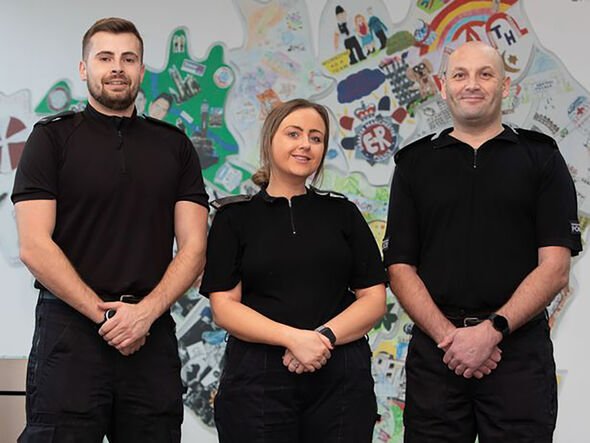 The weapon was a converted blank-firing Retay handgun, with a cartridge still in the chamber.

Mohammed Shabaz Rafiq, from Sale, Greater Manchester, whose prints were found in the bag, was jailed for five years in July last year for possessing an illegal firearm.

Lee Broadbent, the chairman of the Greater Manchester branch of the Police Federation, which represents rank-and-file officers, said: “What a tremendous trio of colleagues. We are very proud of their work.

“The actions of Jack, Jessica and Richard in pursuing a male who was armed with a firearm, which they believed had just been discharged, was exceptionally brave.

“The officers acted fast to detain this man and prevent any harm to members of the public, at significant risk to their own wellbeing.

“Not only was the suspect apprehended, but their excellent commentary during the pursuit directed other officers to support, and the subsequent scene management ensured the recovery of the weapon and other important evidence.

“The actions of these officers has brought a very high-risk individual into custody, which will have had a significant impact on protecting and reassuring the local community.”