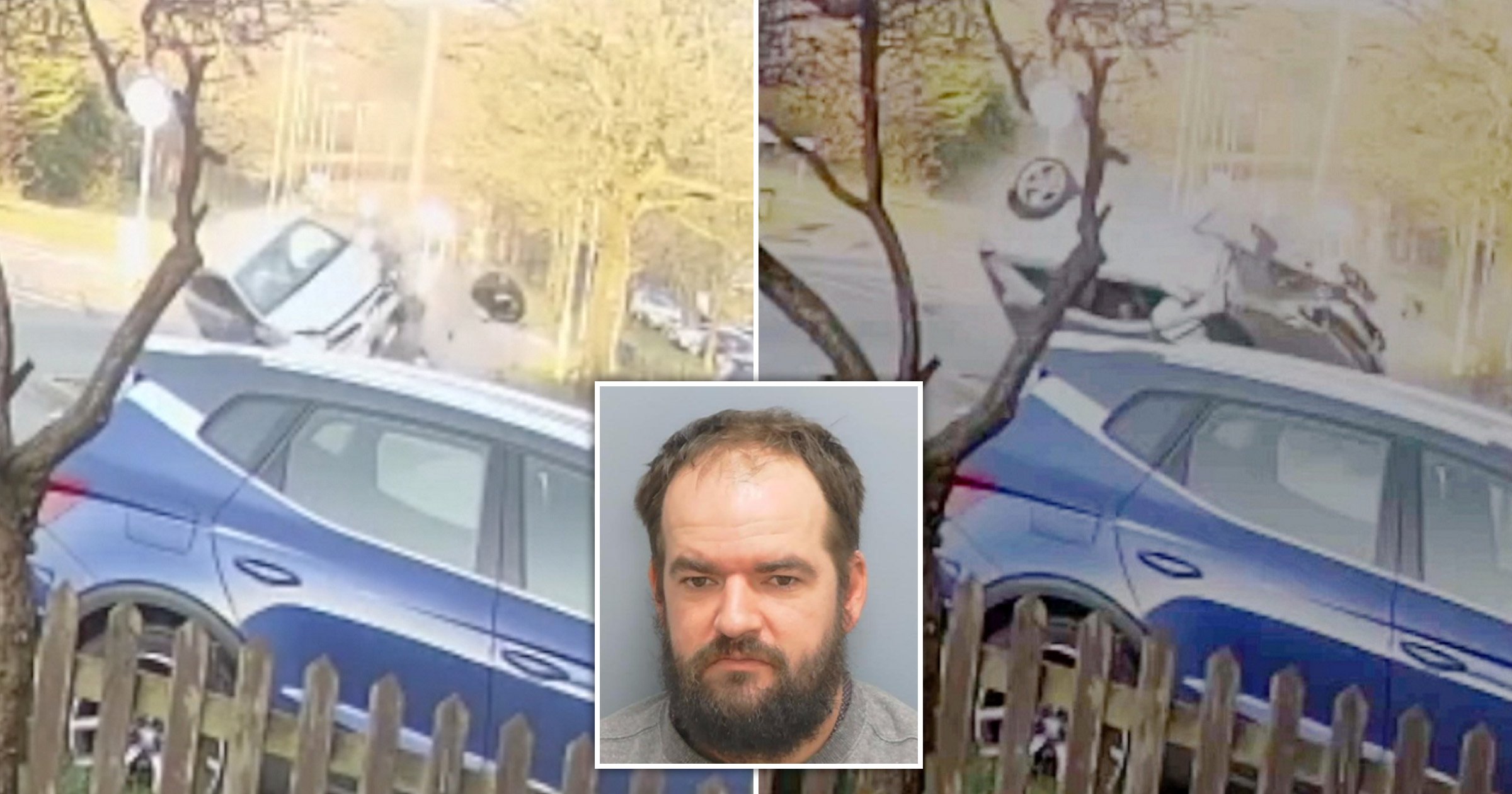 An out of control driver avoided killing pedestrians due to ‘sheer luck’, a court has heard.

James Christopher sped down a 30mph road in Basingstoke at 70mph while 12 times the drug drive limit.

His Vauxhall Astra only came to a stop when it smashed into a traffic island on a residential street.

Both Christopher and his passenger, friend James Briggs, suffered serious and ‘traumatic’ injuries in the crash, which took place on February 28 last year.

The pair were thrown from the car when it flipped through the air.

Christopher, 36, had so much cocaine in his system he was more than 12 times the drug drive limit, Winchester Crown Court heard.

The father-of-four has now been jailed for three years and one month.

He had been caught on camera ‘shooting past’ other drivers who had been driving cautiously due to a glare from a bright sunset.

Prosecutor Stuart Ellacott told the court: ‘Just prior to the catastrophe which was to occur, the car is captured on a house CCTV or doorbell camera travelling in the range of 70mph.

‘Both driver and passenger were ejected from the vehicle in the course of the collision, and the result for Mr Briggs was serious injury.’

Mr Briggs, who was not wearing a seatbelt at the time of the crash, was in an induced coma until March 10.

In a victim statement, he said: ‘I get very frustrated that I was fit, healthy and happy before the collision. I felt I lost myself after, and didn’t know who I was.

‘The effect of this collision is devastating. The trauma of the collision and how it happened will stay with me for life.’

Christopher has previous convictions for dangerous driving and drugs-related crimes.

Francisca Da Costa, defending, told the court: ‘His offending is neither sophisticated nor violent. If you were to speak to Mr Chistopher when he is not under the influence of drugs, he is a reasonable and pleasant man.

‘Following the accident, Mr Christopher contacted his friend because he was very concerned about him. He wishes he could go back and never have driven on that night.’

Ms Da Costa claimed Mr Briggs grabbed the steering wheel moments before the crash, but accepted that excessive speed was the main cause of the smash.

Christopher admitted dangerous driving causing serious injury and driving under the influence of drugs on the day of his trial.

Hampshire Constabulary’s investigating officer DC Mark Furse said: ‘It is sheer luck that nobody was killed with Christopher driving at such high speeds through this residential area, while 12 times over the legal drug limit.

‘As you can see from the dash-cam footage, he showed total disregard for the safety of anyone else on the roads, including his own friend in the passenger seat, who has been left with life-changing injuries.

‘As he heads to prison following this sentence, he is extremely fortunate that he doesn’t have someone’s death on his conscience.’

Christopher was found to have 616 micrograms of Benzoylecgonine, a cocaine compound, per millilitres of blood in his system.