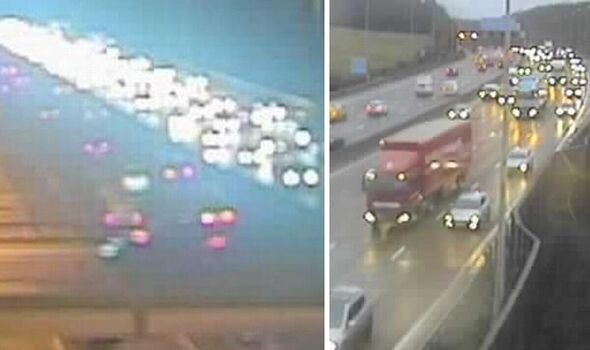 Huge queues were forming on the M25 this morning after several incidents, including a crash involving a lorry and a car. There are long delays on the M25 in Hertfordshire after the accident between J19 (Watford) and J18 (Chorleywood).

Two our of four lanes were closed on the M25 anti-clockwise between J19 and J18 due to the collision.

Delays of 60 minutes beyond normal travel times and eight miles of congestion on approach were also reported.

Motorists were advised to allow extra time for their journey.

According to traffic monitoring system, Inrix, one lane was closed due to a broken down vehicle on M25 anticlockwise after J6 A22, although traffic was said to be coping well.

There are also ong delays due to an earlier broken down car on M25 clockwise at J5 M26 / A21 (Sevenoaks), with congestion to J2 A2 (Darenth Interchange), and for eight miles back along the M26.

One delayed driver tweeted: “Queue on to #M25 from the #M26 is absolutely massive this morning.

“We aren’t far off the #M20 almost the entire motorway is crawling.”

National Highways East tweeted at 6.38am: “2 (of 4) lanes are closed on the #M25 in #Hertfordshire anti-clockwise between J19 and J18 due to a collision.

“There are delays of 60 minutes above normal travel times, please allow extra time for your journey. Thank you for your patience.”