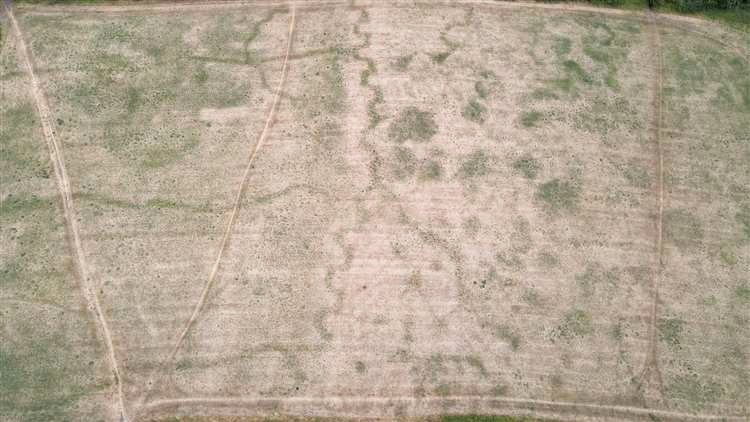 A drone pilot identified the outline of trenches used to prepare for World War One in a field in Nottinghamshire, after drought conditions made it possible to spot them.

Steven Smith sent his camera up as part of the search for a man reported missing at the Beacon Heights beauty spot near Newark.

The man was soon found safe and well, but Mr Smith had a look at the photos anyway and was puzzled when the images he saw showed zigzag lines in the fields, which were visible because grass had died back due to the dry conditions this summer.

At first, he thought they could be even older, as the area was important in the British Civil Wars.

But he soon guessed their true heritage, as he has an interest in wartime history.

‘I’ve been to battlefields in France and Belgium in the past and seen the real trenches,’ he said.

‘They’re practice trenches. They follow the line of the ridge. They reminded me of what I’d seen on the battlefields.

‘I didn’t know if anyone had seen them before. They’re 110 years old.

‘I wonder when anybody last saw them. I also wonder what happened to the men who made them.’

Kevin Winter, a local history expert, confirmed that the Royal Engineers trained in Newark during both world wars and would have been involved in the planning and digging of practice trenches in readiness for the front.

‘They certainly look like world war one practice trenches, with the teeth outline.

‘I have to say they aren’t particularly straight and regular, but maybe that’s why they needed the practice.’

These are not the only practice trenches to be found in the UK, dug by soldiers rehearsing for when they would have to cross the Channel to France.

But they were not known to have been built in these fields.

Mr Winter, who is chairman of the East Midlands branch of the Battlefields Trust and exhibitions and collections assistant at the National Civil War Centre, said their existence was previously unknown, but similar practice trenches had been discovered at Kelham that were also from the period.

An investigation of the Kelham site, which has also surrendered Civil War artefacts, was shelved due to Covid, but the hope is it can resume in the future.

Mr Smith said: ‘I walk the dog there every day. I had never noticed these patterns until I saw the footage.

‘They’ve never appeared before now and it’s because the ground is so dry. It seems the drought has made them visible.’

When World War One broke out, there was a huge recruitment campaign to find soldiers to fight.

Captain Leslie Vickers wrote an account of the period in his book ‘Training for the Trenches’.

He wrote: ‘Men should be taught to dig them in broad daylight at first and then when they have learnt the knack, they should be set to dig them at night.

‘From time to time during their training they should be made to return – preferably to the same sections of the trenches – to improve them and maintain them. An excellent scheme is to arrange competitions among the men to spur them on to invent ingenious devices for protecting themselves and their fellows during their occupation of them.

‘At certain times they should also be made to spend a night and then several nights there, going through the regular routine of sentry duty, stand to arms, etc., just as they will have to do in real warfare.’

He added: ‘The rules of the trenches can be summed up in a few words: Keep your spirits up and your head down.’

Life in the trenches was notoriously tough, with soldiers at risk from artillery attacks, poison gas or from disease from the poor conditions.

‘Trenchfoot’ became a well-known condition from standing in wet mud, with many needing feet amputated.

Exact casualties are not known, but around 8,500,000 soldiers are thought to have died as a result of wounds and/or disease in World War One, which lasted from 1914 until 1918.