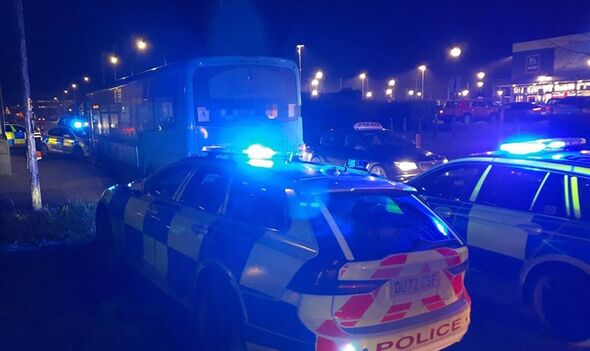 A drunk passenger stole a bus and drove it through a town leaving a “trail of devastation” in his wake, it is alleged.

The bus collided with several other vehicles after it was taken on Monday evening.

Other passengers fled in fear as the man allegedly took control of the vehicle and drove through Milton Keynes, Buckinghamshire.

Miraculously, no one was hurt in the incident.

But a man has been arrested and charged with aggravated vehicle taking and drink driving, Buckinghamshire Live reports today.

The force said: “When people say ‘when you’ve had a drink, take the bus’, it isn’t meant to be taken literally. This bus in Milton Keynes was stolen by a drunken passenger earlier on this evening, and left a trail of devastation as it collided with numerous other vehicles before being stopped.

“A male has been arrested on suspicion of aggravated vehicle taking, dangerous driving and drink driving. He remains in police custody at this time.

“Thankfully nobody was injured during this incident and the other passengers managed to flee the bus as it was being stolen. The bus driver was also uninjured in the theft.

“If you witnessed the incident or were one of the passengers, please come forward and call us on 101 or our website, quoting reference 43230034418.”

A photograph taken on Monday night shows at least three police cars surrounding the bus, a single-decker vehicle, after it came to a stop outside an Aldi supermarket in the heart of Milton Keynes, near the town’s main train station.

The commotion also happened near Milton Keynes’ large retail park, at which some stores open late and so the area will have been busy with shoppers at the time.