Residents said it was a “miracle” no one was hurt in the carnage in Selly Oak, Birmingham, as a house – believed to be student digs – partially collapsed. Kirstin Bunce, 22, was woken by commotion, what she compared to an “earthquake”, at around 3am and later filmed the devastation left on the street.

Kirstin, who lives in the property with eight other students, said: “I woke up to a whole load of commotion going on outside. I’m not sure what happened last night – but I was aware there was loads of people in suits walking around Selly Oak.

“It’s end of year and people are partying. At 3am I just heard a lot of commotion going on outside. Stuff like ‘get down from there’, ‘it’s really unsafe.’

“They sounded like they were climbing the scaffolding. Someone was there to tell them to get down thankfully and they were drunk. It’s concerning what could have happened. I’m really glad no one has been hurt.

“We woke up to what felt like an earthquake. My room was right underneath where it all fell down.

“I thought for a second that I was going to die. It was really scary. I looked out of the window and my car had been crushed. It happened at 10.19am. I ran out and started crying. It was so overwhelming. Everyone has been so helpful.”

Eight people were evacuated from the house as a “precaution,” reports Birmingham Live. 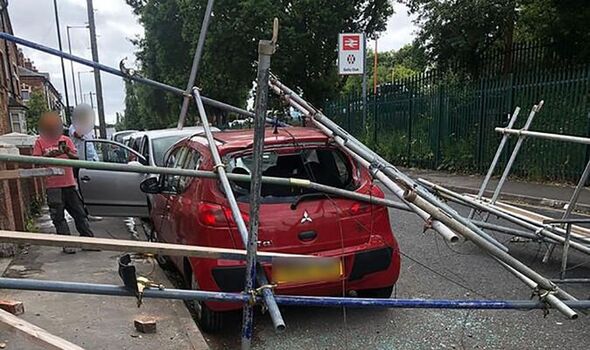 Police cordoned off part of the road, which is near a railway station and two pubs.

They and firefighters remained on the street for several hours to ensure the area was safe.

A 30-year-old woman was about to walk past the house when part of the loft extension and scaffolding fell down. The local, who asked not to be named, said: “The whole lot crashed down. My legs went to jelly.

“I was so shocked. It was lucky as it could have been me under there. It’s a miracle no one was hurt.”

A spokesperson for West Midlands Fire Service said: “Firefighters from Bournbrook fire station have responded to Heeley Road, Selly Oak where a mid-terraced house has partially collapsed along with some scaffolding.

“Around eight people have been evacuated from neighbouring properties as a precaution. The road is currently closed.”