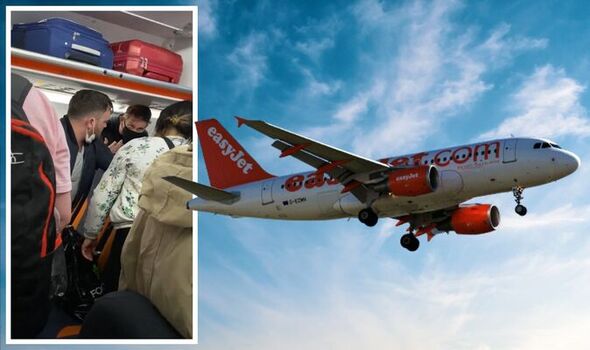 The woman had been travelling from London Luton to Bodrum in Turkey at the time of the incident last month. Upon landing, Turkish police had to intervene to remove the woman from the aircraft. A male travelling with the irate lady was also slapped with a 2-year ban by the budget airline.

In what appears to be an altercation with other passengers, a woman who wished to remain anonymous started filming the ordeal.

Footage shows the banned couple arguing with other passengers and cabin crew inside the plane.

She continued: “Go on then, say it again, say what you were going to say to me! Nothing!”

Footage then goes on to show Turkish police liaising with easyJet staff and handing over the couple’s passports for inspection.

The unhappy travellers can then be seen walking off the plane towards the gangway.

The passenger who filmed the incident said: “Then they just argued the whole flight.

“Well she argued, he ignored her and tried to sleep but she kept hitting, slapping and shouting at him.

“Then he started to Argue back with her.

“An air hostess asked them to calm down and she threatened to smash her teeth in and sort her out once off the plane.

“Then it was quiet for 10-minutes and she started swearing and screaming nonstop.”

Other passengers appeared to try and intervene telling the woman to leave her partner alone and calm down.

The witness continued: “The people behind her politely asked her to stop and leave her partner alone because he wasn’t doing anything, just sleeping.

“She went mad and then the partner joined in and they argued against the other couple together and fell back in love for a few minutes.

“They high fived each other and she said ‘let’s go get arrested in Turkey together babes.’

“He had a bottle of whiskey under his seat from duty-free but the air hostess didn’t know about that.

“They kept asking her to be quiet but she was so aggressive it was clear they were scared of her.

“He had obviously taken some substance because he was constantly sniffing and moving in a way we know drug takers do.

The passenger added: “Then as we landed we were told we could get up and she started again so we were told to sit down and we all knew we were waiting for the police.

“Kids were screaming in fear because she was so loud!

“The police boarded and took their passports.

“They continued to argue with the police and were taken to a room in the police station.”

Should rowdy passengers be banned from all flights? Have your say by CLICKING HERE and joining us in our comments section below – Every Voice Matters!

Social media users were left shocked by the behaviour.

One user said: “So unfair on the other passengers, there’s just no need.”

Another wrote: “Ban drinking in airports and on aircraft.”

One more said: “People like that should be banned from flying for life.”

EasyJet has been contacted by Express.co.uk for further comment.