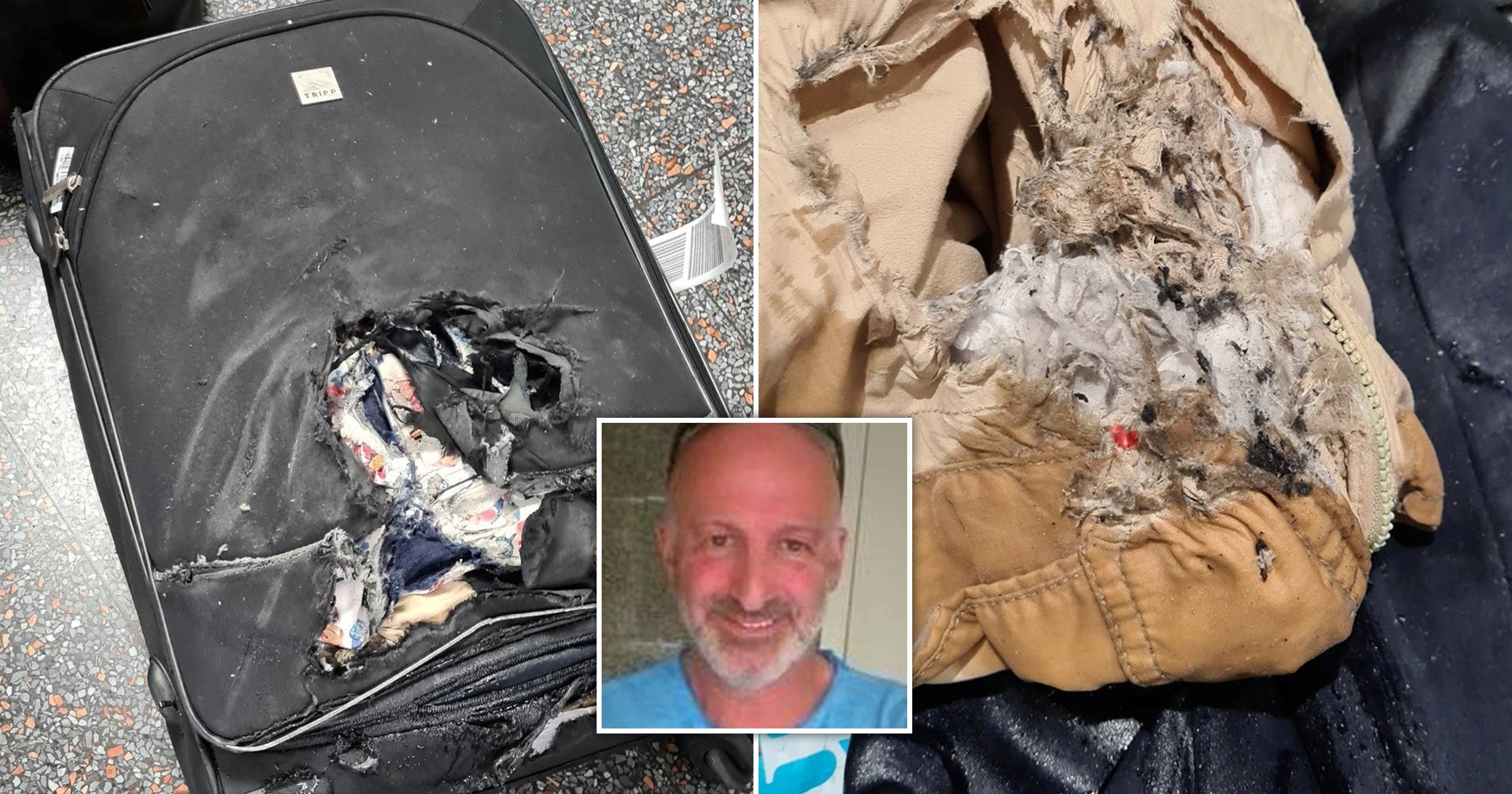 An easyJet passenger whose suitcase was destroyed claims the airline is completely ignoring his efforts to get in touch.

David Benjamin, 63, says his luggage looked like ‘someone had put a drill through it’, while the new wedding outfit he paid £400 for was shredded and crushed.

He is trying to process a claim on his insurance – but says he ‘can’t speak to anyone’ at easyJet – despite phoning, emailing and tweeting them over and over again.

The artwork and production manager had flown from Nice, France to Gatwick airport last weekend following a family wedding.

‘We waited for quite a while in baggage reclaim before our bag came through on the conveyor belt upside down’, he said.

‘I took it off, stood it on its wheels and then it fell over. I saw the wheels had been damaged which then brought my attention to the rest of it.

‘They obviously knew it was damaged because of the delay and how they laid it carefully on the front hiding it.’

He continued: ’It looks as though it has been torn and crushed. Everything got crushed. The shorts on the top got completely mangled.

‘No conveyor belt can do this sort of damage, to me it looks like it has been caused by some sort of vehicle.’

It comes as hundreds of flights are cancelled and suitcases are missing for days amid staff shortages at airports across the country.

David, who has travelled around the world for work for three decades, has had damaged luggage twice before – but says this is the worst he’s ever seen.

On other occasions, he has been able to report the situation straight away at the airport – but says this time, staff ‘just pointed me to a machine and told me to scan a QR code’.

One worker told him that ‘due to cutbacks everything is attempted to be done digitally now’.

After complaining about the incident on the website, he has not heard back, while his emails have also got no reply.

Meanwhile, the phone number he was given generates a recorded message that says not to leave a voicemail as it likely won’t be replied to.

His next work trip will see him fly to Thailand next Sunday – but it looks like he’ll have to replace his own suitcase for now.

‘Everything is automated you can’t speak to anyone’, David, from Staplehurst in Kent, said.

’I even went to Twitter to reach out to EasyJet and they said to DM my information which I have done but have still not heard a response.

‘I’m stuck in limbo and I don’t know what to do. It is just frustrating, I don’t even know if they are going to replace the case.

‘Even if they turn around and say we’re not liable then at least that’s a response but I haven’t even got that.’

A spokesperson for easyJet said: ‘easyJet flies on average around 1700 flights per day across more than 30 countries and incidents of damaged luggage are extremely low.

‘Our baggage team will contact the passenger directly to process their claim. We apologise for the damage and for any inconvenience experienced as a result.’

Gatwick Airport said airlines are responsible for hiring their own baggage handling firms.