Some restaurants and pubs are withdrawing from the Eat Out to Help Out scheme because of “hostility towards staff”.

Under the scheme the government pays half of the bill on meals served from Monday to Wednesdays throughout August.

Owners says a surge in demand on these days has led to staff being shouted at, and “physical and mental stress”.

In tourist-heavy areas like the South West many say the scheme is not helping at an already busy time of year.

Some say fewer customers are dining on other weekdays as a result.

The Treasury said the scheme was working.

UK Hospitality, which represents the industry, said generally the feedback had been “very positive for businesses who were staring ruin in the face”.

However, The Tavern Inn in Newquay is one venue that has pulled out of the discount scheme, which is capped at £10 per diner and does not include alcoholic drinks. 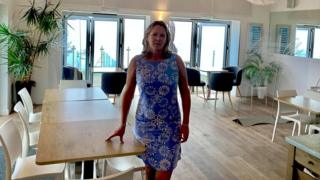 Owner Kelly Hill said: “It has brought us nothing but negativity due to the huge demand, causing long waits on food, tables over-running and hostility towards our staff.

“People are ordering big, big meals; they are not willing to wait for their food; our staff are being shouted at for having no tables, or for the service being slow. It’s put an awful lot of strain on our waiting staff and kitchen staff.”

The Heron Inn in Truro has also opted out, saying on Facebook: “Safety is our main priority, and with the increased amount of people visiting us, it is making it difficult for us to manage with social distancing rules in place.

“We have received unpleasant comments and general unwelcome behaviour from customers when they are unable to find a table due to us having reached capacity”.

The Westleigh Inn near Bideford in Devon has also withdrawn because of the “physical and mental stress it has put us and all our staff under”.

Landlady Steph Dyer said that “the idea is brilliant, but just not in August. Do it in October. Everybody I have spoken to is finding it difficult to maintain standards of service”.

In Crantock near Newquay, the C-Bay bistro says the scheme has led to a loss of business because people are not booking for the days when it is not running.

Owner Nina Eyles said: “In July we were full every day, but now Mondays to Wednesdays are absolutely manic and we are much quieter than normal on the other days.

“If it was in winter we would be so grateful and it would have been amazing.”

The Treasury said the scheme was designed to protect jobs.

“Sales for pubs and restaurants were up by a third for the first week of the scheme, compared with the week before,” it said.