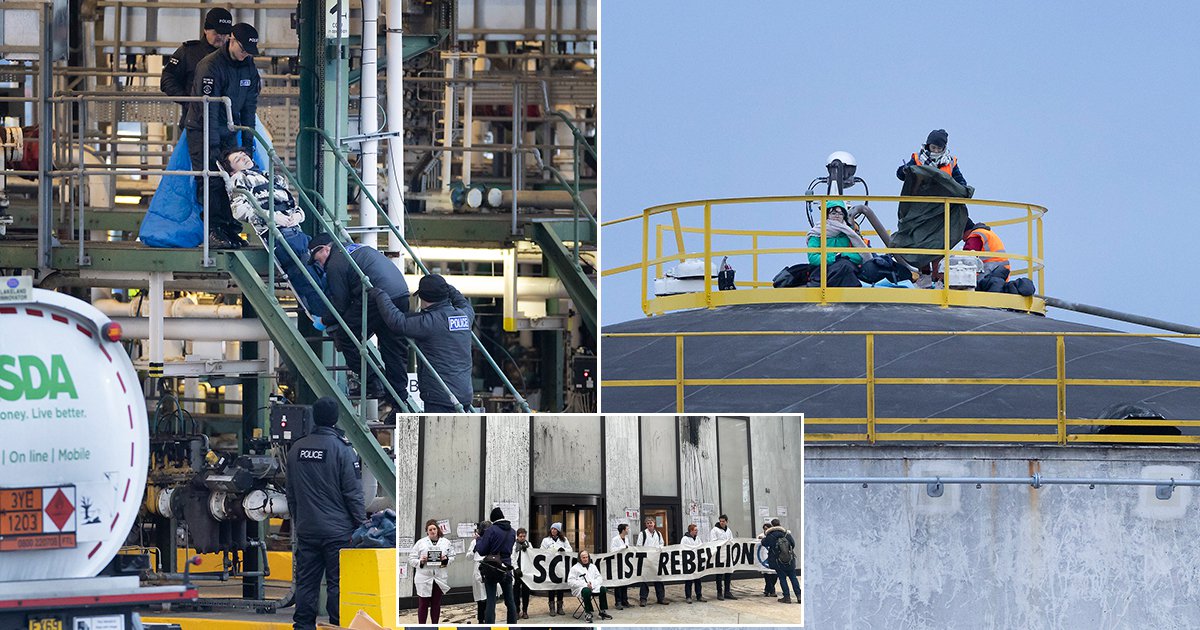 Young environmentalists continued a campaign of disruption to oil distribution around the UK early this morning, after scaling fences at a depot.

A number of demonstrators recorded videos from the roof where they were ‘locked on’ – saying they are ‘terrified’ about their futures.

Meanwhile, hundreds of experts from around the world are engaged in a ‘scientist rebellion’, which saw oil chucked over Shell’s headquarters in London.

The action at the Thurrock oil depot comes after yet another dire warning from the Intergovernmental Panel on Climate Change (IPCC), which said in a damning report earlier this week that the world is on a ‘fast track to climate disaster’ – and that the time to act is ‘now or never’.

Before police removed some demonstrators from this morning’s action, officers said yesterday that they had arrested 192 people at the Navigator plant since Friday.

There have also been further arrests at a series of other sites.

Essex Police explained on Monday that they were ‘continuing to engage with a small number of people remaining in situ’.

In a video message, she said: ‘I am currently locked on in the pipe line for the ceiling of the fuel loading bays at Navigator fuel terminal. I’m with 20 other young people who are up with me, who are terrified of their futures.

‘I am so scared. This is obscene. It’s obscene that I’m 23 and the only way that people will listen to me is by locking myself to the pipework of a fuelling station.’

Hannah added: ‘Every drop of new oil is signing a death sentence of children in the global south, and the children that I want to have one day.’

Urging no new oil and gas, the young activist said she was putting her ‘body on the line’ for people who are dying from extreme heat, drought and famine and those choosing between heating and eating.

He tweeted: ‘If you listen to one thing today can you please make it this . This is Hannah and she has the courage to question and act for all our futures . . . futures being jeopardised by a greedy idiocracy of dunces’.

Critics, including from the Government, point out that the group appear to be breaking the law.

Footage also appeared to show the alarm going off in Thurrock this morning, and protesters being removed by police.

Activists from Just Stop Oil and Extinction Rebellion (XR) have been blocking access to oil terminals over the past six days.

They say demonstrators have dug a secret network of tunnels in Thurrock and at Grays oil terminal, also in Essex.

Protests have also taken place at the Esso oil facility, near Heathrow Airport in west London, Kingsbury Oil Terminal, Warwickshire, a terminal in Tyburn, Hythe Terminal and a BP facility, both near Southampton.

Some activists have contrasted Government rhetoric at the recent Cop26 climate summit in Glasgow with new plans to use more fossil fuels.

But a Government spokesperson said earlier this week: ‘Any criminal activity will not be tolerated, and swift action is being taken by the police, preventing significant disruption to the public and industry.

‘While we are working to drive down our use of expensive fossil fuels, there will continue to be ongoing demand for oil and gas over the coming decades while we transition to cheaper low-carbon energy.

‘Turning off our domestic source of gas overnight would put energy security, British jobs and industries at risk, leaving us more dependent on foreign imports.’

Meanwhile, experts from around the globe have been taking part in what they called the ‘world’s largest ever scientist-led civil disobedience campaign’.

A number of them in the UK used modified fire extinguishers to spray biodegradable fake oil on a Shell building, where they also plastered scientific papers on the walls.

The scientists are calling for a ‘climate revolution now’ and say ‘1.5°C is dead’, in reference to the target for global warming, which the IPCC warned is almost out of reach.

One of those taking part, Cat Acheson, a social scientist and PhD researcher, said: ‘I’m here today taking non-violent direct action against Shell, because the continued use and expansion of fossil fuels is endangering all life on our planet.

‘I am terrified of the global suffering that companies like Shell are causing, and the lack of action from our government to put a stop to the harm.’

The global action, scheduled to run between April 4 and 9, is set to see hundreds of ‘Scientist Rebellion’ activists take ‘disruptive actions targeting scientific and governmental institutions’ in more than 25 countries, on every continent.