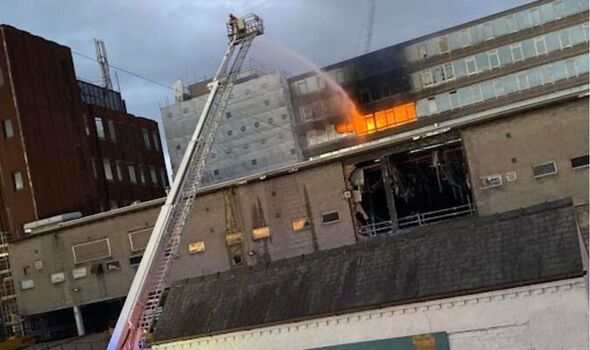 Pictures show a blaze on the upper floors of the old Pennine Hotel on Macklin Street in Derby.

The building is disused and partially demolished, Derbyshire Police said.

A Derbyshire Fire & Rescue Service first received a call about the fire at 8.52 pm on Saturday, May 28, a spokesperson said.

The spokesperson confirmed that eight fire engines and two aerial ladder platforms had been sent to the scene.

Nottinghamshire fire crews have also been called in for assistance, Derbyshire Live reported.

A number of roads have been closed in the city centre as emergency crews attend the scene.

A cordon is understood to be in place around Colyear Street.

Derbyshire Fire & Rescue service has asked the public to avoid the area.

They tweeted: “Fire crews are currently dealing with a fire at the old Pennine Hotel on Macklin Street in #Derby. Please avoid the area.”

Derbyshire Police has issued a statement about the incident.

It read: “We’ve closed a number of roads in Derby city centre after a fire broke out in a disused, partially demolished hotel.

“The blaze started in buildings at the site of the former Pennine Hotel earlier this evening.

“Police and fire crews are at the scene and several roads in the immediate vicinity are shut.

“We are also advising people who live in the city to stay indoors and keep windows and doors closed due to the risk of smoke spreading.”